A Decade After Atheists Were Found to be the Most Disliked Group in the Country, Little Has Changed September 12, 2016 Hemant Mehta

A Decade After Atheists Were Found to be the Most Disliked Group in the Country, Little Has Changed

It was more than 10 years ago when researchers at the University of Minnesota announced some shocking numbers confirming the nation’s distrust of atheists: Nearly 50% of people disapproved of their child marrying an atheist, while 40% of Americans felt atheists didn’t share their vision for society. Both numbers were literally the worst among the various racial and religious groups studied.

If you’ve ever heard people say atheists are the most disliked group in America, they were probably referring to that study.

Sociologist Penny Edgell and her team, who conducted that study a decade ago, have now released an updated version of it.

Are atheists still the most hated minority group in America? 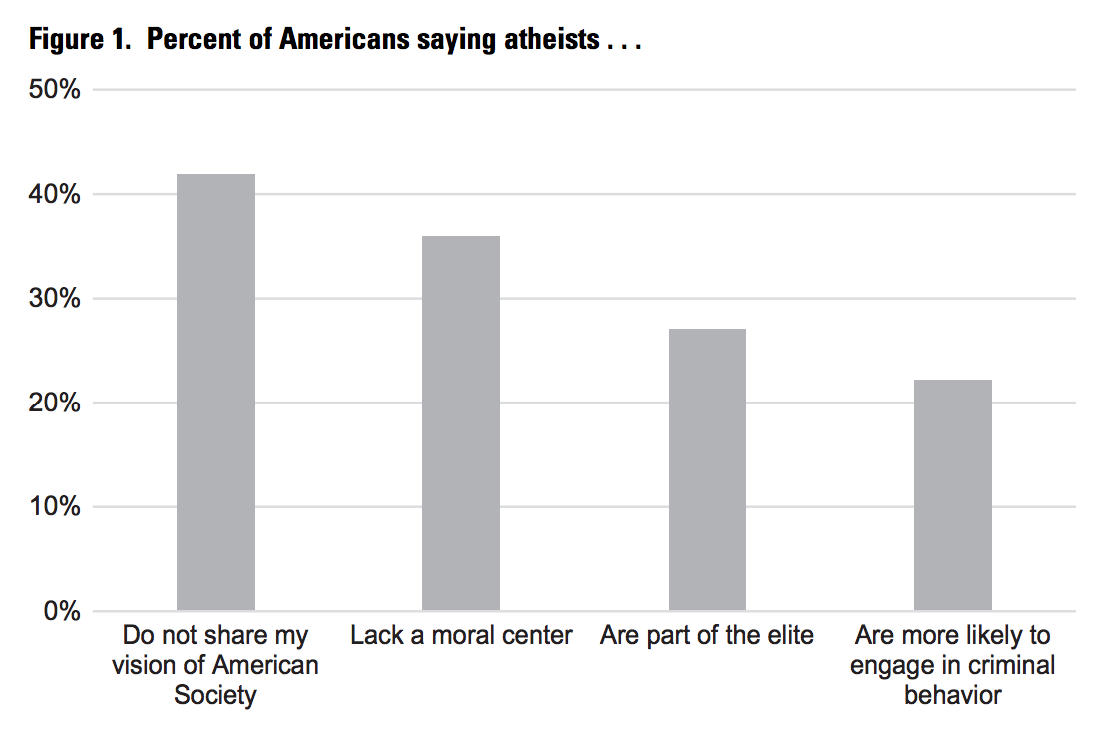 Their report, published in September’s issue of the journal Social Forces, shows that, despite the demographic trends showing an increase in those who are religiously unaffiliated, atheists are still really, really unpopular.

Using data collected in 2014, the study found that people still don’t think atheists share their vision for society (41.9% of people said that about us), but Muslims fared even worse (45.5%).

Furthermore, 43.7% of Americans said they would disapprove of their child marrying an atheist, though 48.9% said the same thing about their kid marrying a Muslim.

So when it comes to who’s hated most, we’re no longer leading the pack… but those results are still surprising given all the progress we’ve made over the past decade.

A press release from the University of Minnesota summarized the results this way:

The findings of this most recent survey support the argument that atheists are persistent cultural outsiders in the United States because they are perceived to have rejected cultural values and practices understood as essential to private morality, civic virtue, and national identity. Moreover, any refusal to embrace a religious identity of any type is troubling for a large portion of Americans.

Edgell also offered an explanation for why this was happening despite the changing demographics:

“There are no mainstream, cultural expressions or depictions, on television for example, to present atheism to the general public,” says Edgell. “It’s only in the last decade that a secular coalition of American atheist and non-religion organizations have gotten together. I expect that in the near future we’ll see more effort on their part to change perceptions and lobby to change policy,” regarding the role of religion in everyday life.

I would disagree on that front… there are many positive atheist characters on television today than ever before and more celebrities coming out as atheists, too. I would love to see more, but it’s not that hard to name atheists in popular culture. The problem isn’t just that we lack positive role models; it may be that it’s not enough to counter all the nasty things other people say about us

That said, this is a stigma that continues to haunt us and we’ll have to keep working to get rid of it.