A Former Employee of Miss Cleo’s Psychic Network Reveals the Scam from the Inside September 11, 2016 Hemant Mehta

Bennett Madison used to work for the “Psychic Readers Network,” best known as the company Miss Cleo always wanted you to call. 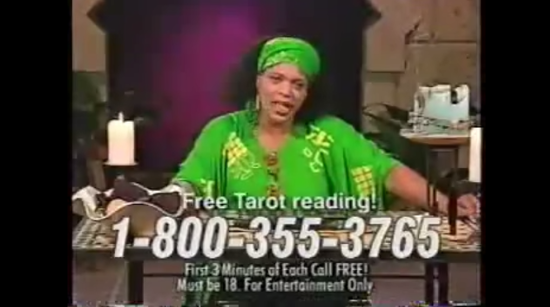 Madison was in college and wanted to make some quick cash… but she didn’t have any psychic powers. Lucky for her, that wasn’t one of the prerequisites for the job. She explains in an essay for the New York Times.

Since I was not actually psychic, the Psychic Readers Network provided me with a minimal script to read and a computer program that simulated a tarot card spread. I used neither. It worked better to make it up as I went along.

I expected callers to see through my act, but mostly they dialed in ready to believe. Anyway, it turned out I wasn’t such a bad psychic. My two years as a submediocre liberal arts major had made me an expert at fraud. The key was just to toss out a bunch of free associations and hope one of them hit.

… our customers were desperate and sad.

They were being evicted. They were about to lose custody of their children. They were lonely enough to pay by the minute to chat with a stranger. The fact that the stranger was me began to seem cruel.

That’s really the kicker. This isn’t just entertainment when desperate people are spending money they don’t have. You’re toying with their emotions, you’re urging them to take risks they shouldn’t be taking, and you’re giving them false hope. It may be a game for the fake psychics, but the people on the other end of the line may be taking their advice very seriously.

That’s not to blame Madison for what she did. It was a job. She quit when she realized she was crossing an ethical line. But there’s no shortage of charlatans who continue to do what she did, despite knowing this is all a con. They don’t care who they hurt. They need to be called out and vilified.

September 11, 2016
You Don't Need Faith to Give Your Life Meaning
Next Post

September 11, 2016 Deplorable Christian Right Leader Slams Hillary Clinton for Calling People Like Him "Deplorable"
Browse Our Archives
What Are Your Thoughts?leave a comment