Donald Trump Will Discuss His Health With Dr. Oz, Someone Else Who Values Ratings Over the Truth September 10, 2016 Hemant Mehta

Donald Trump Will Discuss His Health With Dr. Oz, Someone Else Who Values Ratings Over the Truth

When Donald Trump‘s campaign released his medical history, it seemed like a joke. His gastroenterologist (!) wrote a letter saying Trump’s health was “extraordinarily excellent” (!!) and that, if elected, Trump would be “the healthiest person ever elected to the presidency” (!!!!!!!).

For a guy whose followers think Hillary Clinton coughing disqualifies her from the presidency, Trump’s medical records were notable for being a document no credible doctor would ever release.

So it’s about damn time he spoke publicly about his health, considering his demands that Clinton be even more open about her own.

Unfortunately, he won’t be releasing any more paperwork. He’ll instead chat with Dr. Oz, a once-brilliant surgeon who sacrificed his credibility for cash, has never examined Trump personally, and whose reputation for spreading bullshit rivals the GOP. 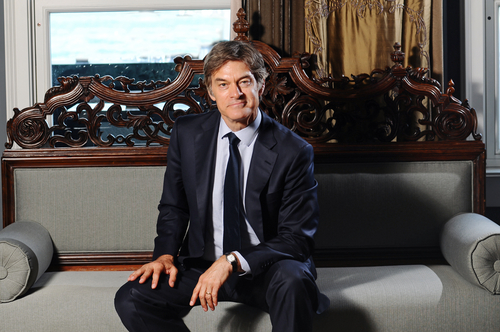 Donald Trump and his daughter Ivanka Trump will sit down on “The Dr. Oz Show” on Sept. 15, where the Republican presidential nominee will talk about his “own personal health regimen,” according to an announcement from the show.

Dr. Oz also will ask Trump “why the health of the candidates has become such a serious issue in this campaign.”

It’s going to be a farce, just like the rest of his campaign, and that’s a problem when you realize that a President Trump would be the oldest person to ever hold that office. His health is a legitimate question and we have yet to get a real report from someone who’s thoroughly examined him. All we will have by Election Day will have come from a guy who wrote up Trump’s medical report (full of bombastic language) in five minutes… and a guy who history suggests he cares more about ratings than properly informing his audience of the truth.

If Clinton did it, it would be a national scandal. When Trump does it, we shrug because we know not to expect any better. The pundits are right: Trump is being graded on a curve.

(Image via Official / Shutterstock.com. Thanks to Bonnie for the link)

September 10, 2016
This Two-Minute Video of Bacteria Evolving Resistance to Antibiotics is Incredible
Next Post

September 10, 2016 A Mother Files Criminal Charges After Her Autistic Son's Mentor Forcibly Baptized Him
Browse Our Archives
What Are Your Thoughts?leave a comment