Donald Trump Wants to Unite the Country By Making Sure We All Live “Under One God” September 10, 2016 Hemant Mehta

At the Values Voter Summit yesterday, Donald Trump did his best to convince the evangelical crowd that he was one of them. And that meant assuring them that he would make this a Christian Nation, everyone else be damned. 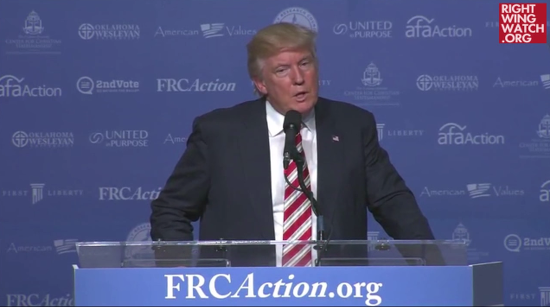 Kyle Mantyla at Right Wing Watch summarized it this way:

“We’re all equal and we all come from same Creator,” Trump said. “There’s a biblical verse that I’ve often read and I want to repeat it again because I think it is so important to what we’re trying to achieve right now for our country. It’s from 1 John: 4: No one has ever seen God, but if we love one another, God lives in us and His love is made complete in us.”

“Imagine what our country could accomplish if we started working together as one people, under one God, saluting one flag,” Trump concluded, apparently anticipating a future in which every American, regardless of religion, is required to worship Jesus Christ.

Needless to say, there are atheists, Jews, Muslims, and even other Christians who are horrified by the prospect of a President who wants to make sure our country worships the same God.

One other thing: Trump actually quoted 1 John 4:12. But if he actually read the Bible instead of quoting whatever a staffer told him to say, maybe he would’ve picked up on the lesson from 1 John 4:20:

Whoever claims to love God yet hates a brother or sister is a liar. For whoever does not love their brother and sister, whom they have seen, cannot love God, whom they have not seen.

Now that’s a verse he ought to take to heart.

September 10, 2016
A Mother Files Criminal Charges After Her Autistic Son's Mentor Forcibly Baptized Him
Next Post

September 10, 2016 Alabama HS Football Announcer: If You Don't Stand for the National Anthem, You Should Be Shot
"I agree that his statements were "unbiblical," (as if that were the big worry on ..."
Savpunk After Weeks of Silence, the Pastor ..."
"We are called to model Christ’s love through forgiveness and restoration toward our Pastor.But only ..."
eric After Weeks of Silence, the Pastor ..."
"Just curious if it's only the non-religious blogs that are getting this treatment. Since I ..."
RichardSRussell The Mormon Church May Excommunicate a ..."
"Helfer remains a practicing Mormon? How long do they have to practice before they get ..."
RichardSRussell The Mormon Church May Excommunicate a ..."
Browse Our Archives
What Are Your Thoughts?leave a comment