Earlier today, we posted about a disturbing comment allegedly made by McKenzie High School football announcer Allen Joyner before last night’s game. It was reported by Denise Crowley-Whitfield, who posted about it on Facebook… and has since deleted that post (and, it seems, her entire page). 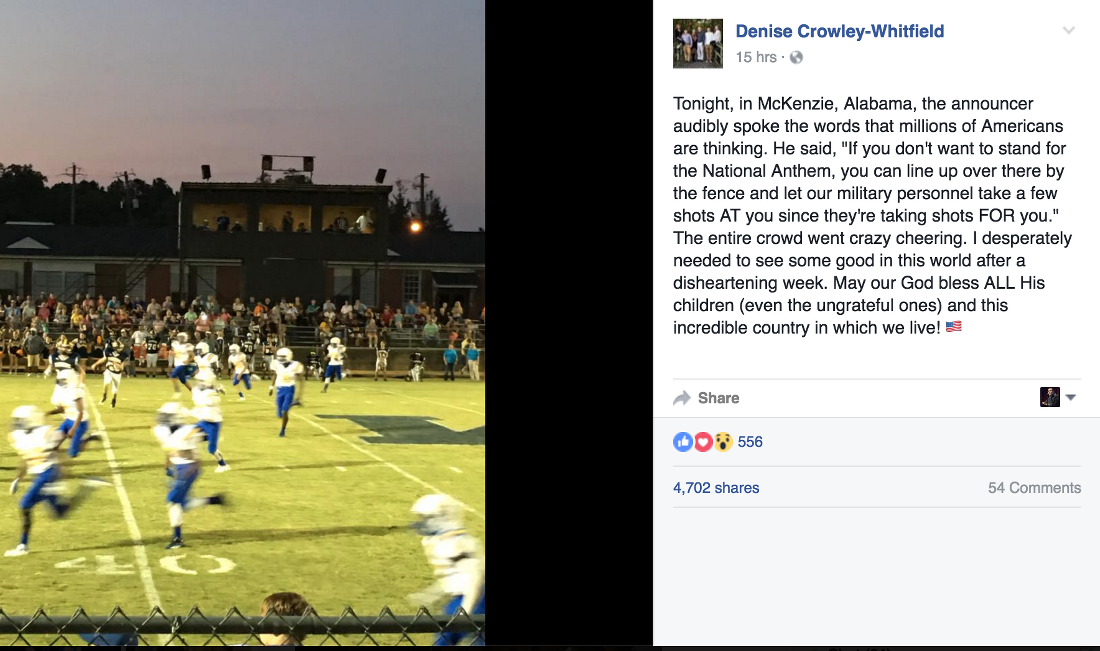 “If you don’t want to stand for the National Anthem, you can line up over there by the fence and let our military personnel take a few shots AT you since they’re taking shots FOR you.”

Hilarious. If you choose to protest in a civil way, exercising your First Amendment rights, you deserve to die. And just remember: This was a proud Christian saying it. Joyner is a pastor at Sweet Home Baptist Church who apparently moonlights as a high school football announcer. I guess Jesus taught him to kill those who disagree with you.

You can say he meant it as wordplay, but that anti-protest sentiment, much less the violent rhetoric accompanying it, has no place at a high school football game.

Not that his congregation thinks that way. In fact, his church issued this statement this afternoon: 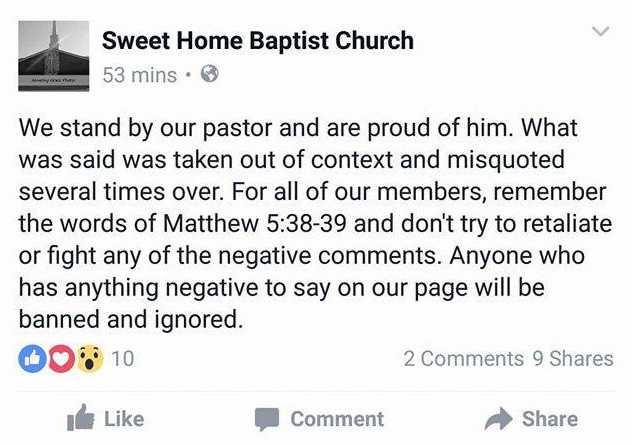 We stand by our pastor and are proud of him. What was said was taken out of context and misquoted several times over. For all of our members, remember the words of Matthew 5:38-39 and don’t try to retaliate or fight any of the negative comments. Anyone who has anything negative to say on our page will be banned and ignored.

Needless to say, nothing was taken out of context. The pastor really did say the military should shoot people who don’t stand for the National Anthem. Whether he meant that literally is another question, but if it was a joke, I fail to see the humor.

It’s also telling that, if his comments were taken out of context and misquoted, the church sidestepped telling us what he actually meant. Maybe that’s because even they know what their pastor said was indefensible.

And in case you’re wondering, Matthew 5:38-39 says this, quoting Jesus:

“You have heard that it was said, ‘Eye for eye, and tooth for tooth.’ But I tell you, do not resist an evil person. If anyone slaps you on the right cheek, turn to them the other cheek also.

Those are powerful verses… but they hardly make sense when Pastor Joyner encouraged the murder of people who metaphorically slapped him on the right cheek.

Maybe the church should check out Matthew 5:44:

But I tell you, love your enemies and pray for those who persecute you.

I guess they didn’t get that far. (Spoiler: Nothing in that whole chapter says you should make sure your enemies have bullet holes in their bodies…)

The church currently has multiple 1-star reviews on its Facebook page and they are harsh. I caught these before they were deleted.

What a disgusting “human being” is this foul “pastor” Allen Joyner. Advocating the murder of people who have a right guaranteed in the US Constitution to free speech. So you are using yours to push for murder? You people make me sick. I’m a US Army veteran, white, and female and I support Collin Kaepernick and others like him. I took an oath that I haven’t rescinded. You and your high-and-mighty ilk is why I left Christanity. Seems any peice of shit can call themselves pastor. You certainly don’t act in the way of Jesus. My love for Jesus and God is the reason that I think Christianity is an abomination.

Pastor Allen Joyner’s comments at last night’s game were absolutely abhorrent and disgusting. Allen, you, especially you as a community leader, should be ashamed of calling for the execution of American citizens by the US military. I am a 22 year veteran of the United States Air Force and I am deeply offended and saddened by your hateful rhetoric. We fight so that all Americans retain their rights and freedoms to protest. I would never turn a weapon on my own countryman simply because they protest by remaining seated during the National Anthem, by refusing to recite the Pledge of Allegiance, refusing to stand or pledge during any act. These things we do, these pledges, these songs, these are not compulsory acts. They are acts that we are ALL free to join or not. I am proud that we have that freedom whether or not I agree with someone’s non-violent protest. You, on the other hand are promoting extremist violence by way of state sanctioned executions. You are obviously standing for the compulsory actions by way of preaching hatred, jingoism, American exceptionalism — all because people do not believe or think as you do. I am grateful that the majority of Americans do not thirst for their brother’s blood as you do. You are a disgrace, those who agree with you are a disgrace, and you are a black mark upon this great nation. You should certainly hang your heads in shame.

Xandi Andersen, who brought this to my attention, also added in a message to me:

I’m a 10 year veteran, and I am disgusted by the idea that military members or veterans would want to harm a person for exercising their right to free expression. I’m so sick of being lumped into that gun slinging, Bible thumping, blind patriotic stereotype. That is not me. I served in the military because it was the only way I could afford healthcare and higher education at 17 years old, and I’m an activist now because I don’t believe military service should be any child’s only option.

What will Joyner be preaching tomorrow? Love your enemies… unless their patriotism suggests our country isn’t perfect, in which case you should blow their goddamn brains out?

***Update***: The church has now deleted its page from Facebook as well. Considering how much they all enjoy thinking of their enemies getting murdered, they really can’t handle fair criticism, can they?

***Update 2***: Erin Edgemon at Al.com has a statement from the school district where this controversy began:

“Patriotism should be a part of school events but threats of shooting people who aren’t patriotic, even in jest, have no place at a school,” she wrote in an email. “Threats of violence are a violation of school policy and certainly not condoned by the school board.”

Bryan said she didn’t know if any action will be taken against Joyner. The school board meets next week, and the matter could be addressed then, she said.

September 10, 2016
A Muslim's Plea to Pull His Kids from Music Class Was Rightly Denied by a Toronto School District
Next Post

September 10, 2016 An Atheist Asks: Was It Worthwhile to Chat with the Jehovah's Witnesses Who Came By My House?
Browse Our Archives
What Are Your Thoughts?leave a comment