Having a mentor from the Big Brothers Big Sisters program is supposed to be an educational, uplifting experience. Ohio native April Defibaugh certainly thought it would help her 11-year-old autistic son. And everything was fine until her son’s mentor took him to get baptized (apropos of nothing) and held him underneath the water (to his surprise), causing her son to have recurring nightmares.

She’s since filed a police report calling for criminal charges against everyone involved. 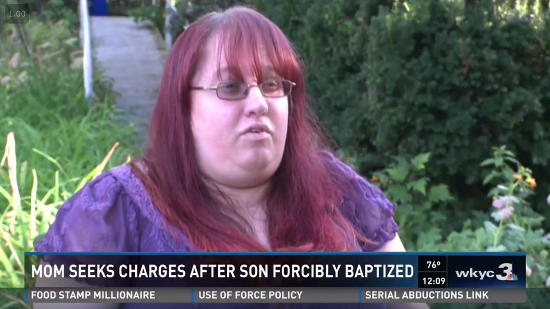 The officer who filed the report told her it’s unlikely any of the criminal charges would stick since there was no physical harm. That said, it’s appalling that these people might get away with forcing Christianity upon a child who wasn’t asking for it. It’s the result of a mindset that thinks you’re helping people by foisting your beliefs on them — something that would undoubtedly be controversial if any other religion were involved. (Can you imagine Todd Starnes‘ reaction if a Big Brother took the autistic child of a Christian mother to a Satanic Black Mass ceremony?)

This isn’t over yet. The next steps depend on what happens with that police report. We’ll keep you updated.

September 10, 2016
Donald Trump Will Discuss His Health With Dr. Oz, Someone Else Who Values Ratings Over the Truth
Next Post

September 10, 2016 Donald Trump Wants to Unite the Country By Making Sure We All Live "Under One God"
Browse Our Archives
What Are Your Thoughts?leave a comment