Trae Crowder, the Liberal Redneck, made a video for the New York Daily News about Michele Bachmann, the former congresswoman who still can’t get through an interview without saying something batshit crazy. 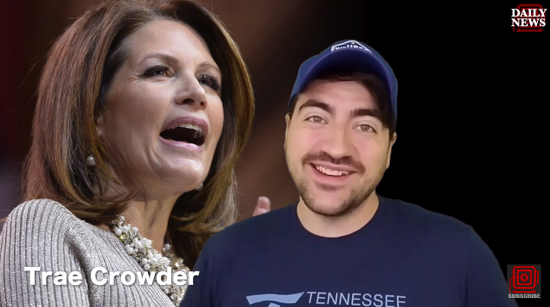 She says that if Hillary wins, there will be an influx of those dastardly brown people and they’ll settle in places like Florida and Texas, and Republicans will never be able to take those states and, thus, any general election ever again in the future.

Well, honey, let me say: From your crazy-ass lips to the fake Lord’s ears, darlin’, that would be awesome.

If Trump’s eventual defeat leads to the end of power for politicians like Bachmann who are then seen as too extreme even for the GOP, he will have done the country a huge service.

September 9, 2016
Your Eyes Will Roll When You Hear Deepak Chopra Describe His Latest Business Venture
Next Post

September 10, 2016 This Two-Minute Video of Bacteria Evolving Resistance to Antibiotics is Incredible
"That show has some of the best word play and miscommunication. Pity the poor right ..."
Pennybird Anti-LGBTQ Official Drops AL Senate Bid After Mistress ..."
"A fun piece of trivia I remember from childhood is that M*A*S*H was the first ..."
Pennybird Anti-LGBTQ Official Drops AL Senate Bid After Mistress ..."
"The horse went extinct in North America at the tail end of the Pleistocene, roughly ..."
CanuckAmuck Christian Post Columnist: “White America” is ..."
"Most of them don't know how to do anything else. The Clergy Project helps members ..."
ORAXX Pastor: Lawmakers Making Churches Obey COVID ..."
Browse Our Archives
What Are Your Thoughts?leave a comment