Hillary Clinton to Religious Audience: We Need a President “Who Will Pray With You and For You” September 9, 2016 Hemant Mehta

Hillary Clinton to Religious Audience: We Need a President “Who Will Pray With You and For You”

Speaking at the National Baptist Convention last night, Hillary Clinton played up her religious credentials for the crowd. That might be expected with any candidate for higher office, but Clinton made a strange proclamation about the role of a Commander-in-Chief: 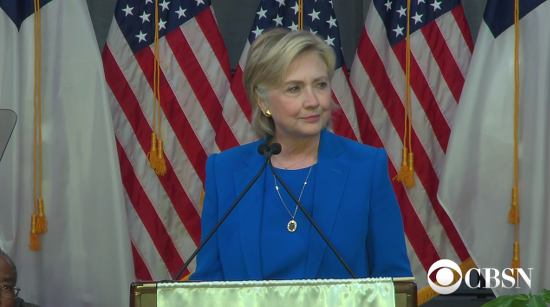 … we need a President who understands the powerful role that faith — and communities of faith — have always played in moving our country toward justice, from the abolitionists of the 19th century, to the civil rights movement of the 20th century, to the unfinished business of today. A President who will pray with you, and for you, who will defend the dignity of every individual, and the principle of religious freedom that was woven into the moral fabric of our nation from the very beginning. Yes, we need a President who will do justice, love kindness, and walk humbly with our God.

She didn’t say that she, as a Methodist, would “pray with you and for you.” She said that any president should be praying, as if that’s the only way to show humility and awareness of the magnitude of the office she’s seeking.

It was one of those unintentional errors that stigmatizes all of us who don’t need to rely on that crutch in order to understand the power of the presidency, including those atheists currently running for or serving in political office.

The Secular Coalition for America was quick to condemn her remarks, saying they expect better from someone who earned an “A” on their recent scorecard:

“Secretary Clinton’s recent comments reinforce the de facto religious test imposed on nonreligious Americans seeking elected office. Americans do not ‘need’ a candidate to pray for or with them. They need a candidate who will lead effectively and represent the values shared by Americans of all faiths and of no faith,” responded Sarah Levin, Senior Legislative Representative at the Secular Coalition…

“Our mission is to hold lawmakers accountable to their nonreligious constituents, both when they are right and when they are wrong,” said Larry Decker, Executive Director of the Secular Coalition for America. “Secretary Clinton received an ‘A’ on our presidential Voter Guides because she has consistently supported science-based public policy and defended the separation of church and state. However, this track record does not excuse her statement suggesting that prayer is a prerequisite for the presidency. There is a very real prejudice against nontheists holding public office in the United States and Clinton’s remarks serve to reinforce this harmful stigma.”

I don’t fault Clinton for talking about her personal faith to a large constituency. I’m used to that. But when she suggests her faith is a reason to vote for her — because she worships the right way — she’s no better than the conservative Christians who believe people who don’t accept the divinity of Jesus are somehow unpatriotic or unable to serve the country honorably.

Clinton maligned atheists, even if she didn’t mean to do it, and her campaign would be wise to apologize. Too bad they won’t. I’m sure they’re hoping this just fades away without many people noticing. But it’s the sort of dismissive remark that would never be acceptable if it were made about any other large demographic. It shouldn’t be okay with us, either.