Why Do We Let Liars Get Away With It? September 8, 2016 Hemant Mehta

Why Do We Let Liars Get Away With It?

It was too short. Far too much time was spent on Hillary Clinton‘s emails, blowing an important-but-settled issue completely out of proportion. Donald Trump‘s answers, as usual, were ignorant and absurd.

But the biggest problem was that moderator Matt Lauer just let Trump get away with idiotic statements and flat-out lies. It was a remarkable lapse of journalistic responsibility. 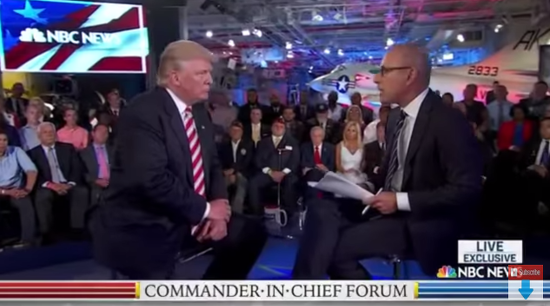 Like when Trump spoke about his stance on the Iraq War:

Not only was it irrelevant to bring up a 2004 “prediction” about a 2003 event, it was a lie. And Lauer had to know that. But instead of calling him out on it, he moved on to another question.

When Trump spoke about Vladimir Putin (and Putin complimenting Trump), Lauer pushed back with some of the horrible things Putin has done. Trump’s response?

… Do you want me to start naming some of the things that President Obama does at the same time?

… as if the two men are the same. Lauer didn’t push back.

It went on like that for a while. Even when Lauer had a good point to make — like how Trump once said sexual assaults in the military were on the rise because “What did these geniuses expect when they put men and women together?” — Trump would weasel out of it and everyone would move on.

It’s not just Lauer. A lot of journalists with access to Trump do this. And it makes no sense. If you have 30 minutes with the guy, what’s more important? Covering ten different topics with little substance, or covering one topic until he actually answers the question?

They seem to think the answer is the former, and that’s why it’s so easy for people like Trump to get away with obvious lies.

People who ought to know better would rather move on than press the issue further. Maybe they think they’re being annoying, or argumentative, or (*gasp*) biased, but when you know the other person is perpetuating a myth, why not keep pushing back? Sometimes, agreeing to disagree isn’t enough.

I realize Lauer had time constraints, but he seemed perfectly fine asking multiple follow-ups about Clinton’s email servers. He should have taken a lesson from Chris Matthews, who kept drilling Trump on the abortion issue until he blurted out that women who get the procedure done should be punished, a response that revealed quite a bit about how Trump thinks.

So why bring up these issues on a site that focuses on faith?

Because so much of what we post about here involves calling out religious people who tell lies — in large part because the people close to them never seem do it. There are pastors promoting biblical myths, hucksters denying evolution, Christian Right leaders claiming homosexuality is inherently evil, David Barton saying anything, etc.

How often do Christians really press their pastors and leaders on their scientific ignorance, or their biblical literalism, or their insistence that abstinence-only sex education works?

Even when they try, how often does the conversation end when they’re told to “just have faith”?

Repeating a lie multiple times doesn’t make it true. And just because someone in a position of power speaks with confidence, it doesn’t mean whatever they say is right. Maybe Christians could do more to change the church from within if they weren’t so damn afraid of questioning their leaders until they got satisfactory answers. And if the other side won’t give them the luxury of a conversation, then they should speak out regardless. Just don’t let the issue drop.

If they don’t do it, we will. But it would mean so much more if people who were on the same team or considered “objective” were the ones raising those questions.

Last night, Lauer missed his chance to expose Trump’s incompetence. I’m not saying that as a Democrat; I’m saying that as someone who appreciates good journalism. What a shame that Trump was able to get away with his lies yet again.

September 7, 2016
Atheists Have Submitted an Application to Erect a "Wall of Separation" Outside the Arkansas Capitol
Next Post