Texas Student Punished for Sitting During the Pledge and, on Another Occasion, Silently Praying September 7, 2016 Hemant Mehta

Texas Student Punished for Sitting During the Pledge and, on Another Occasion, Silently Praying

Memorie Banks, a student in the Killeen Independent School District in Texas, got in trouble last week when she refused to stand for the Pledge of Allegiance. 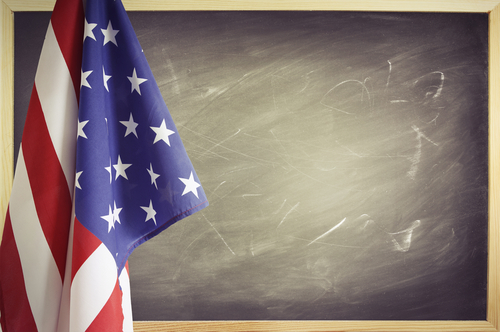 “I was like I don’t feel like I should pray to the flag because it can’t take me to heaven,” Memorie said Tuesday.

As the girl attempted to explain why she didn’t stand, the teacher “ordered her to ‘shut up’ and go back into the classroom,” but then informed the girl “she would no longer have a seat in the classroom,” the grievance says.

That’s completely inappropriate for the teacher, but you know how right-wingers tend to react to these stories. They’ll say the girl needed to be taught a lesson because she was being disrespectful. People died for that flag! The least you can do is say the Pledge!

But wait! This is only half the story. Because Memorie also got in trouble in another class for something else:

… Banks was praying silently at her desk on Aug. 29 when the teacher interrupted her and voiced his disapproval, telling her she could not pray in his class.

We don’t know all the circumstances here, but a silently praying student does not generally make for a disruptive classroom. Once again, she was exercising her freedom, and she was punished for it. It shouldn’t be happening and the District owes her an apology.

So far, however, all they’ve done is explain that students can get out of standing up for the Pledge if they have a note from their parents — which is not true. Students don’t need someone’s permission to get out of participating in the ritual.

The question I have is how conservatives will respond. Will they respect her civil rights? Or will they wrongly stand with an administration that’s curtailing her freedoms? (Or will they bizarrely treat these as separate incidents, defending her prayers but condemning her Pledge boycott?)

September 7, 2016
Should Pediatricians Turn Away Parents Who Don't Vaccinate Their Kids?
Next Post

September 7, 2016 Arizona Public Charter School Sued After Promoting Christianity in Class Despite Several Warnings
Browse Our Archives
What Are Your Thoughts?leave a comment