WTF is Mercury Retrograde? It’s Not What This Astrologer Tells You, That’s For Damn Sure September 6, 2016 Hemant Mehta

WTF is Mercury Retrograde? It’s Not What This Astrologer Tells You, That’s For Damn Sure

Our planet revolves around the sun. (Obviously.) So does Mercury, though it completes its orbit much more quickly because it’s that much closer to the sun. But on those occasions when we’re all in a straight line, it can appear to us that Mercury is moving slower than usual, then standing still, then moving backwards. Even though it’s not. (It’s kind of like when you’re in a car and you pass by a slower car that looks as if it’s moving backwards.)

That phenomenon has been dubbed “Mercury retrograde.”

It’s not special. It happens a few times a year. And it’s just one of those illusions that’s neat to observe and even neater when you understand what’s happening.

So I got excited when BuzzFeed posted a video answering the question “WTF Is Mercury Retrograde?” Because a proper, well-made explanation for an illusion is always appreciated.

They say right up front, too, that they consulted with an “expert.” Who did they give us? Neil deGrasse Tyson? An astronomer? Nope.

They gave a forum to astrologer Chani Nicholas.

She spent a few seconds talking about Mercury’s orbit — literally a few and no more, and even then she got it wrong — but the rest of the time was devoted to pure bullshit: 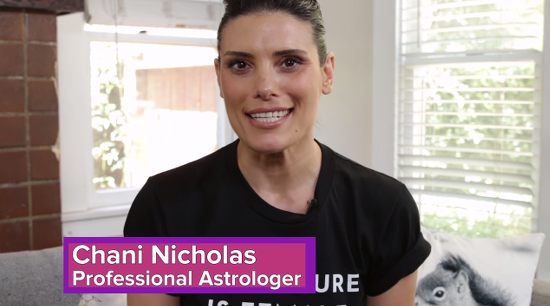 Mercury is the planet of communication, of information. And so we can look at the entire Mercury retrograde process as an alchemical journey. It’s a really good time to fine-tooth comb through information through projects, through revisioning [sic] things. But it’s also this really, can be this really deep transformational process.

… [Mercury retrograde] means different things depending on where Mercury is going retrograde, what sign it’s going in…

Here’s her response to the question, “Will Mercury’s retrograde wreak havoc on my travel plans?”

Not necessarily. Sometimes, it will. I’ve definitely had instances where I’ve traveled during Mercury retrograde and everything has gone wrong. And if that happens, if you have to travel and it’s Mercury retrograde, nothing might go wrong. Everything might go smoothly. If everything does goes wrong again, it’s an invitation to practice patience and going with the flow and just releasing your agenda.

So Mercury retrograde might be bad but it might not be. Thank you, Great Oracle of Wisdom.

The only people who buy into this garbage are gullible people who think the alignment of the planets has any bearing on their life and personality. In other words, this is the sort of “advice” that belongs on the back pages of mindless magazines, not in a video promoted by BuzzFeed to its millions of subscribers.

By the way, it’s not even the first time BuzzFeed has published a piece by someone who thinks Mercury retrograde “is the worst.” For a company with the power to create some real useful, educational videos, this is beneath them and a disservice to their audience.

September 6, 2016
Russian Man Faces Up to Five Years in Prison for Playing Pokémon Go Inside a Church
Next Post