In London, Hate Preacher Anjem Choudary Is Jailed For Five Years. Should He Have Been Convicted? September 6, 2016 Terry Firma

In London, Hate Preacher Anjem Choudary Is Jailed For Five Years. Should He Have Been Convicted?

Anjem Choudary knows how to stir up anger and hatred, and he does it both ways. The London-based solicitor-turned-preacher has radicalized dozens if not hundreds of young British men, playing a part in driving them to commit domestic acts of terror or join the so-called Islamic State on the battlefield. By doing so, for two decades, Choudary ramped up the loathing of many young Muslims for the “decadent West,” while also increasing the fear and enmity among the non-Muslim population toward followers of Allah.

He is, in short, bad news. For a long time, we’ve looked on helplessly as Choudary made incendiary statements while appearing to stay just within the bounds of the law. 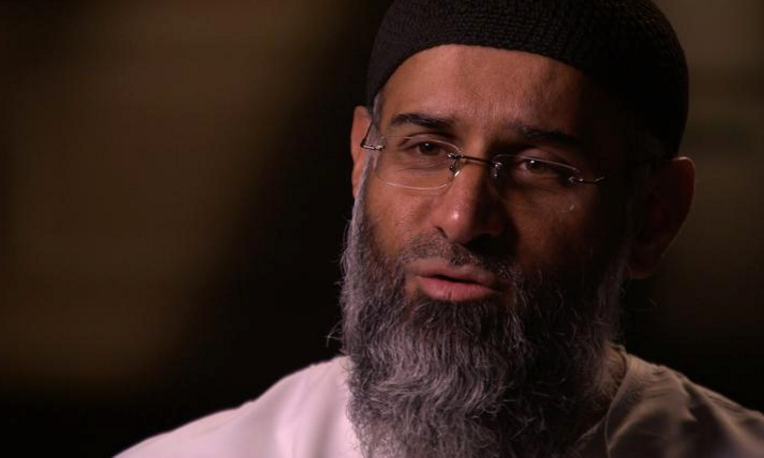 Two years ago, I wrote,

Choudary is an eager self-promoter who clearly longs to be seen as having out-strategized and outwitted a string of politicians, journalists, and law enforcement officials. … He strikes me as smart enough to have plausible deniability … possibly having stayed on the right side of British law, but openly skating within a hair’s breadth of illegality time upon time.

Now, the British legal system found that he’s skated too close to the edge, and gone over it.

Radical preacher Anjem Choudary has been jailed for five-and-a-half years for inviting support for the so-called Islamic State group. The 49-year-old was convicted at the Old Bailey after backing the group in an oath of allegiance published online.

Police say Choudary’s followers carried out attacks in the UK and abroad. The judge, who described Choudary as calculating and dangerous, passed the same sentence on his confidant Mohammed Mizanur Rahman, 33. …

The trial heard the pair also used speeches to urge support for IS after it declared a caliphate in the summer of 2014.

While Choudary richly deserves some level of comeuppance, I confess to squirming a little when I read the BBC’s account of the Old Bailey trial:

“A significant proportion of those listening to your words would be impressionable persons looking to you for guidance on how to act,” [Justice Holroyde] said. He told Choudary he had failed to condemn “any aspect” of what IS was doing, adding: “In that way you indirectly encouraged violent terrorist activity.”

The judge said that in one of Choudary’s speeches he referred “happily to the prospect of the flag of Islam flying over 10 Downing Street and the White House“, and in another set out his ambitions for Islam to “dominate the whole world.”

That’s remarkably rickety stuff in a country where freedom of speech is enshrined into law. Saying Islam should dominate the world? That the Islamic flag will fly over the Prime Minister’s residence and the home of the U.S. president? Not condemning Islamists’ atrocities? There’s a certain so what quality here, isn’t there?

The British publication Spiked, for one, makes the case against Choudary’s conviction. Writes editor Brendan O’Neill:

These are opinions, bluster. [Choudary] had no plans, and in fact no prospect whatsoever, of making these thoughts a reality. He’s being punished for being a fantasist.

And as for the charge that Choudary radicalized others and caused them to commit terrible violence, O’Neill argues that that shouldn’t be good enough for a conviction.

[U]nless we are going to give up entirely on the idea of free will, then we must argue that Choudary is no more responsible for these individuals’ behavior than the right-wing, anti-mass migration newspaper columnists cited by Anders Breivik are for his atrocity, or the authors of the Bible are for every mad killing carried out by fans of that Good Book.

Rigby’s killers, the trekkers to Raqqa: these people made a free decision. Punishing speakers or authors for what others choose to do upon hearing or reading their words is a dangerous game.

Maybe I’m wrong, but I don’t think Choudary could have been convicted in a U.S. court — not on those allegations, anyway. Whether that’s a good or a bad thing, I don’t know. From where I stand, confusingly, seeing him locked up feels morally satisfying… but legally wrong.

September 6, 2016
Illinois Teacher Allegedly Pulled Student Out of His Chair When He Stayed Seated During the Pledge
Next Post

September 6, 2016 Egyptian Atheist: Muslims Who Say ISIS Doesn't Represent True Islam Don't Know Their Own History
"... and we must treat it with the deadly seriousness that it demands.<So we need ..."
KahunaTomato Despite Everything, White Evangelicals Still View ..."
"As long as people want that garbage, they will serve that garbage...https://www.youtube.com/wat..."
WallofSleep Arsonist Burns Down Church of Satan’s ..."
"Do you have a link showing that? Also, even though it was no longer being ..."
alverant Arsonist Burns Down Church of Satan’s ..."
"How does someone get the title of Revelator, like Kat Karr has? What do you ..."
Lectric Liz Lottmann Christian “Prophetess”: God Told Me Trump ..."
Browse Our Archives
What Are Your Thoughts?leave a comment