I Don’t Think Dropping An F-Bomb Was In This Pastor’s Sermon Notes September 6, 2016 Hemant Mehta

Saying a “bad” word isn’t necessarily worth making a fuss about, but when you’re a megachurch pastor accidentally cursing in the middle of a sermon, a few ears may perk up as the congregation wonders if they heard you correctly…

So you be the judge: What do you think Andy Stanley of Georgia’s North Point Community Church said over the weekend? 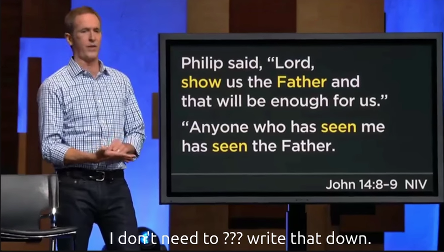 I know what I heard.

[Imitating Person 1:] Write it down, John!

[Imitating Person 2:] I don’t need to fuckin’ write that down.

I’ve watched that clip multiple times and I don’t hear anything else. (One YouTube commenter suggested he was saying, “I don’t even know if I can write that down,” but it doesn’t seem to fit.)

Does it matter? Not really. But if it was a slip of the tongue, it would be nice if Stanley acknowledged what he did and admitted that it wasn’t a big deal. It’s just the way some people talk. It’s not a sin and it doesn’t make him a bad person.

It also brings to mind that time Pastor Perry Noble said the N-word during a sermon in 2014. (He later issued a pseudo-apology to anyone who was offended by that thing he totally didn’t say.)