In a damning criticism of moderate Muslims, Egyptian atheist Sherif Gaber says that anyone who condemns ISIS for their cruelty — saying they don’t represent “true” Islam — must not be aware of their faith’s own history. Because the Islam of the past is also full of slaughter, beheadings, slavery, underage brides, and more.

Destroying ISIS won’t solve the problems of Islamic radicalism, Gaber says, because “the problem lies in the ideology itself.”

Turn on the subtitles and watch. 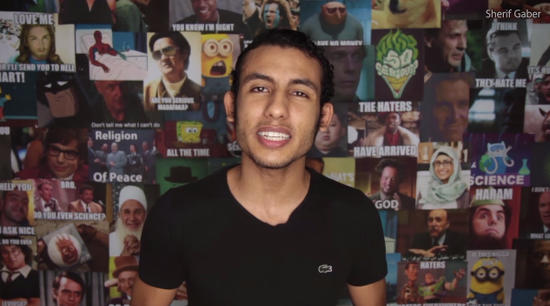 Gaber, for those who don’t know, is the young Egyptian who was arrested in 2013 for starting a Facebook group that included posts about his own deconversion out of Islam. (The police “investigation,” if you want to call it that, was a complete joke.)

September 6, 2016
In London, Hate Preacher Anjem Choudary Is Jailed For Five Years. Should He Have Been Convicted?
Next Post

September 6, 2016 American Atheists to Ohio Gov. John Kasich: Apologize for Your Remarks About Actor Daniel Radcliffe
"I remember back around that time, I was arguing with a denialist online. They were ..."
Nomad For Many Christian Women Raised in ..."
"Would they?"
San_Ban A Capitol Rioter Was Arrested After ..."
"Their butcher god loves everyone...well roasted with BBC sauce."
Fafnir the fugitivewageslave An Ohio Church That Had a ..."
"Well that is how the chocolate chip cookie came about. It was initially an accident."
Pattyrealdeal For Many Christian Women Raised in ..."
Browse Our Archives
What Are Your Thoughts?leave a comment