Phyllis Schlafly, the longtime anti-feminist activist and recent Donald Trump supporter, has died at the age of 92. 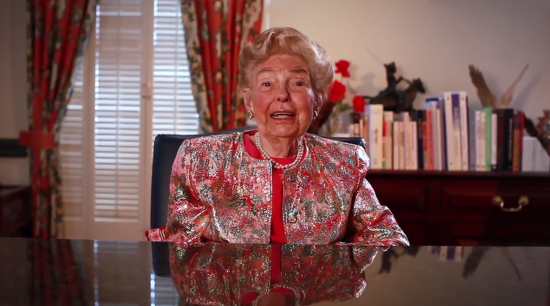 Here’s what the positive spin on her obituary looks like, according to the Eagle Forum, the group she founded in 1975:

An​ iconic​ American​ leader​ whose love for America was surpassed only by her love of God and her family​​,​ Phyllis Schlafly, an ​indomitable pro-family grassroots advocate and organizer, was ​92 years old.

… ​Phyllis ​Schlafly ​spent​ an astounding 70 years ​in public service ​of ​her fellow Americans. Her focus from her earliest days until her final ones was​ protecting ​the​ ​family, which she understood as the building block of life. She recognized America as the greatest political embodiment of those ​values. From military superiority and defense to immigration and trade; from unborn life to the nuclear family and parenthood, Phyllis Schlafly​​​ was a courageous and articulate voice for common sense and traditional values.

What that biography doesn’t tell you is how much society proudly rejected her vision of the country and how much better off we are because of it.

She didn’t just oppose feminism; she opposed the Equal Rights Amendment. But politicians today — certainly on the Democratic side — are expected to support gender equality, equal pay for equal work, and women’s rights.

She said we don’t need a female President because “Our greatest presidents have all been men… and they’ve been very good for our country.” But we’re closer to that goal than ever before.

She denied the existence of sexual assault within a marriage, saying, “By getting married, the woman has consented to sex, and I don’t think you can call it rape.” It’s safe to say the courts don’t feel the same way.

She claimed that teaching evolution in school was a problem because “childhood joy and ambition can turn into depression as children learn to reject that they were created in the image of God.” Thankfully, evolution is expected to be taught at public schools everywhere. It’s only a story now when it’s not.

She rejected the acceptance of homosexuality, civil unions, and gay marriage, saying about gay people in 2010, “The problem is they are trying to make us respect them, and that’s an interference with what we believe.” While respect may take time, the conservative movement has lost this battle. Those who share Schlafly’s views on this matter will have a difficult time getting into or remaining in public office from here on out.

This list could go on for a while. The point is: History will show she was on the wrong sides of several important issues. She spent her life defending positions that society has overwhelmingly rejected in favor of tolerance, inclusion, and kindness. She was alive long enough to see the legalization of marriage equality and the rise of a strong feminist movement that continues to this day. She saw her own organization, Eagle Forum, basically break down in her dying days due to infighting between family members.

Yes, she had temporary success, but it didn’t last. Or at least it won’t last. She fought to hold people back rather than uplift them. She put her faith ahead of human decency. And while she’ll be remembered as a conservative icon for a long time, most people aren’t going to celebrate her legacy. She’ll be remembered for who she hated, not who she helped.

It’s just too bad she won’t be around to see the first female President sworn into office.

I don’t take joy in the death of people I strongly disagree with. After all, there are a lot of family members in mourning today and it’s easy to forget that she had a personal life that may have been admirable in a way her public life was not. But if there’s anything positive we can take from her life, it’s that Schlafly dedicated herself to causes she strongly believed in and had significant impact along the way. Aren’t we all hoping to do the same thing?

Let’s just be grateful that many of the dreams she had will never be achieved.

I will mourn his passing, not for the man he was, but for the man he could have been… I ask this of everyone — let his death mean something. Let every mention of his name and of his church be a constant reminder of the tremendous good we are all capable of doing in our communities.

To paraphrase a famous saying, live your life so that Phyllis Schlafly would have called you a threat to our country.

September 5, 2016
Jehovah's Witnesses Have the Adam and Eve Story All Wrong
Next Post

September 6, 2016 I Don't Think Dropping An F-Bomb Was In This Pastor's Sermon Notes
"Oh noes - Wicked Woeful Wokenicity!"
Mundusvultdecipi Humanist Leader Mubarak Bala Finally Gets ..."
"Logic.I'm sure we'd all love to hear it and you'll get an audience with the ..."
InDogITrust Joe Biden Is Still “Deeply Catholic” ..."
"Trump and O'Reilly have almost started their tour. He should hurry if he wants to ..."
Martin Penwald Christian Preacher Thanks God for Sparing ..."
"This is why other countries which still have vestigial, if rarely enforced, blasphemy laws should ..."
Mundusvultdecipi Humanist Leader Mubarak Bala Finally Gets ..."
Browse Our Archives
What Are Your Thoughts?leave a comment