Ben Utecht, a former NFL player with the Indianapolis Colts and Cincinnati Bengals, has been in the news lately promoting his new book, Counting the Days While My Mind Slips Away: A Love Letter to My Family. Most of his exposure has focused on the serious effects concussions have had on his long term memory. He has even gone on to say he does not remember the event of receiving his Super Bowl ring because of the brain damage he has suffered. 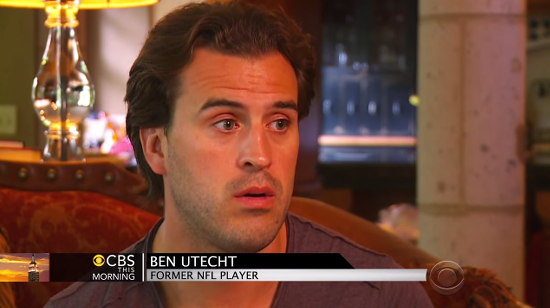 Because Utecht is a religious man, the Christian Post also covered his book release, but focused on a less discussed piece of his message. In the story, Utecht recalls his college years at the University of Minnesota where he dealt with a stress fracture and dim prospects as a professional athlete, which led him to begin doubting his faith:

He explains that he got mad at God and felt that he deserved better than to be hurt again. His anger with God caused him to get further immersed in the party culture until he eventually threw his commitments to purity that he made in high school out of the window when he was 21 years old.

Despite losing his pure walk with the Lord, it was a “miracle moment” that led Utecht to get his act together and re-straighten his path with the Lord.

Utecht began dating a fellow believer and saw their relationship as the saving grace he needed to escape his “party” lifestyle. After recovering from his injury, Utecht was signed to an NFL contract and became engaged to his college sweetheart. Feeling pressure from his rise to fame, Utecht found a way that worked for him and his fiancé to maintain their monogamous relationship:

Utecht explained that he devised a plan to wear a wedding ring in public as a way of guarding against the sexual temptation that commonly faces famous professional athletes out in public.

“I wore a wedding band throughout that entire time and I wanted to do my best to make sure that my intentions were always front and center,” Utecht told CP. “I think that was very important and that protected me. I was also just being careful about the environment that I wanted to put myself into, especially while my fiancé was in Minnesota.

There are two implications that bother me in this Christian Post article. First, that life as a public figure is deemed almost inherently immoral (and, by extension, sex is considered a sin). When an athlete “comes out” as Christian it is often characterized, like the Post does here, as a heroic act. The reality is that many Christian and non-Christian professional athletes do not practice abstinence and are still decent people. Just as many Christian and non-Christian athletes abstain and shouldn’t be condemned for it.

Secondly, Utecht’s relationship history is used here as a testament to how God will continue to work His magic… even as Utecht’s mental health diminishes. God is so good that he kept this relationship strong… but he couldn’t protect Utecht’s brain from damage? Not exactly the work of a benevolent God right there.

Utecht’s continuous battle with memory loss is indeed a sad, humbling story to tell. It’s a shame, really, that the wonderful memories he’s creating with his wife are used to advocate for a God that allows a preventable medical condition to deteriorate those same fond recollections.

September 5, 2016
A Nashville Catholic School is Under Fire for Teaching Basic Facts About Sex and Birth Control
Next Post

September 5, 2016 Jehovah's Witnesses Have the Adam and Eve Story All Wrong
Browse Our Archives
What Are Your Thoughts?leave a comment