Catholic Columnist: Now That Mother Teresa’s a Saint, Let’s Pray for the Healing of Stephen Hawking

Now that Mother Teresa is a saint, writes Benjamin Wiker of the National Catholic Register, we should all pray for Stephen Hawking to be cured of his ALS. Because “she could, God willing, go to him now.” 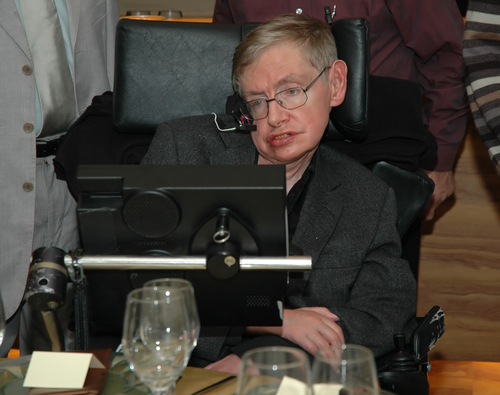 But don’t pray for the miracle to happen yet. Only in eight days. Because that’s how long it took for the risen Jesus to appear in front of St. Thomas (a.k.a. “Doubting” Thomas).

I know this might be rather bold, but I’d like to ask, say, several million people out there to pray to Mother Teresa during her canonization day, and eight days thereafter, for the conversion and complete healing of the great physicist Stephen Hawking.

Imagine what would happen to Hawking himself if God would see fit to answer this prayer through the intercession of Mother Teresa. He would not be any less a physicist. He would still know what he had previously known, from Black Holes to Quantum Mechanics, but his universe would quite suddenly become immeasurably larger and more complex.

Moreover, if these prayers were answered, Hawking would know exactly what it was like, some two millennia ago, to be healed directly by Jesus, and that would mean that the New Testament would quite suddenly be transformed from a book of fiction (as too many scientists see it) to a book of startling miraculous facts. That book would then have to be on the same shelf with his physics books.

That’s a lot of wishful, misguided thinking for one column…

Even if Hawking were miraculously cured, which isn’t going to happen, there would be no evidence that Mother Teresa was the reason for it. The New Testament doesn’t suddenly become a work of non-fiction just because doctors can’t explain something.

But here’s a thought: If nothing happens in eight days, can Wiker dismiss the notion that St. Teresa is responsible for miracles? The Vatican has already attributed two of them to her that she doesn’t deserve. Or is this one of those “heads I win, tails you lose” challenges?

Don’t worry. We’ll check back in eight days after Mother Teresa’s canonization — that would be September 12 — just to see how Stephen Hawking is doing. Everyone get your rosary beads ready.

(Image via The World in HDR / Shutterstock.com)

September 5, 2016
All Atheists Should Be Organ Donors
Next Post