Elizabeth Smart Slams Purity Culture: “There Is Nothing That Can Detract From Your Worth” September 4, 2016 Beth Stoneburner

Elizabeth Smart Slams Purity Culture: “There Is Nothing That Can Detract From Your Worth”

Last time we heard from Elizabeth Smart, she was starting to openly discuss the ways her purity culture upbringing made it difficult to escape from her rapist and kidnapper, despite multiple opportunities to do so.

Today, she is actively speaking out against her Mormon church’s teachings about women, sex, and virginity as it is linked to worth: 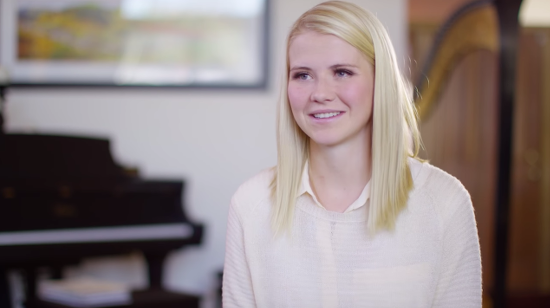 “You’re like this beautiful fence,” she remembers being told in class after she’d returned home. “And you hammer these nails in, and then every time you have sex with someone else, it’s like you’re hammering in another nail. And you can take them out, you can repent of them, but the holes are still there.”

“I just remember thinking, This is terrible. Do they not realize I’m sitting in class? Do they not realize that I’m listening to what they’re saying? Those are terrible analogies. No one should use them, period. Especially for someone who’s been raped, they’ve already felt these feelings of worthlessness, of filth, of just… of just being so crushed, and then to hear a teacher come back and say, ‘Nobody wants you now’… You just think, I should just die right now.”

… “People need to realize there is nothing that can detract from your worth,” she said. “When it comes to rape and sexual violence and abuse, that can never detract from who you are.”

Smart rightly believes that her church — and, let’s face it, many churches of various denominations — must reform its thinking that the worth of young women equates to having an intact hymen. (Curiously, male purity is not mentioned at all).

I wasn’t raised a Mormon, but I still vividly recall a church seminar I attended in high school that endorsed abstinence until marriage, in which the speakers used similar analogies to the nails-in-the-fence one above.

I was roughly a year away from entering what would eventually become an abusive relationship with a Catholic man who served on the staff of his church’s youth group. I blamed myself every time he raped me. It was my fault, I thought, when he said things like, “If you weren’t so hot, I’d be able to keep my hands off you.” So I stopped wearing tight jeans, stopped trying to look cute before seeing him; it didn’t work. Taking my cues from abstinence groups like Silver Ring Thing and other popular books in the purity movement such as Every Young Woman’s Battle by Shannon Ethridge, I believed I was too “tainted” to leave him and start over with someone who respected me.

To this day, I’m still somewhat amazed that I got married at all, to a man who didn’t care that I had “baggage” because, as it turned out, he had some of his own. I also learned from my husband the extent that purity culture hurts men by forcing them into small boxes of masculine stereotypes.

I don’t believe there is anything wrong with holding abstinence until marriage as an ideal, but to equate loss of virginity with a loss of value and worth is not only wrong, it’s a message that has the power to ruin lives.

September 4, 2016
Preacher Mark Burns Storms Out of Interview After CNN Reporter Asks Him About Lies in His Biography
Next Post