What is it with Kentucky county clerks foisting their religious beliefs on everyone else while on the clock? What Trigg County Clerk Carmen Finley did isn’t anywhere close to as bad as what Kim Davis did, but it suggests her religion ought to have some influence on people who visit her office.

Anyone who enters the Trigg County office will see this giant painting of the Ten Commandments on the wall: 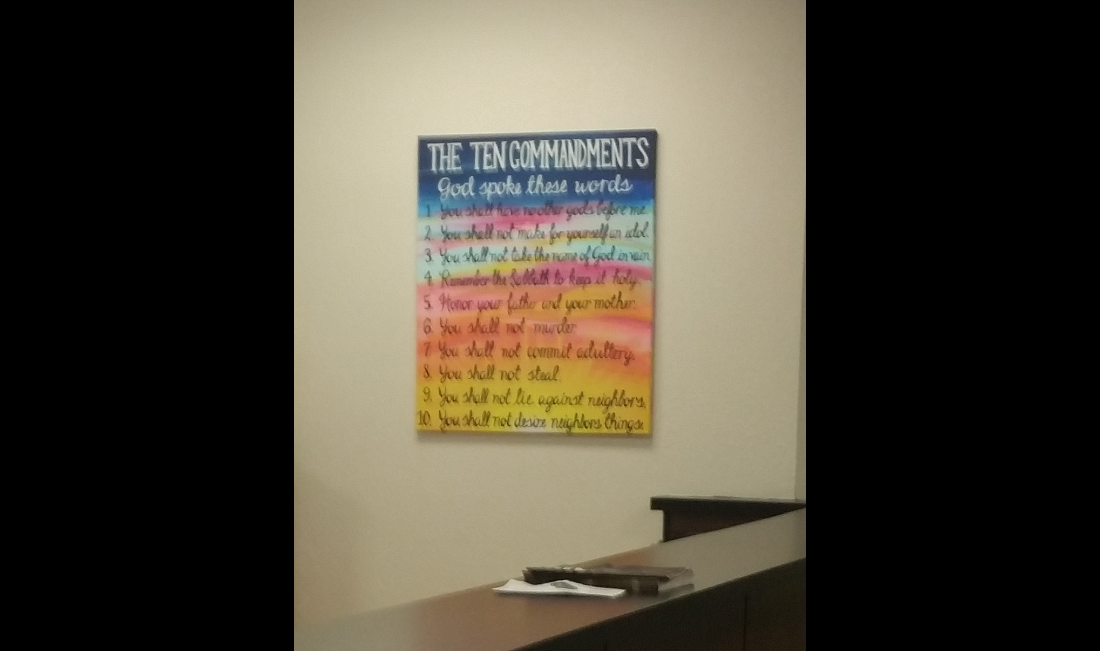 The Freedom From Religion Foundation calls that unconstitutional and sent a letter requesting that it be taken down:

“In McCreary County v. ACLU, the Supreme Court ruled that a modern display of the Ten Commandments in two Kentucky courthouses violated the U.S. Constitution,” FFRF Staff Attorney Patrick Elliott writes to Trigg County Clerk Carmen Finley. “The 6th U.S. Circuit Court of Appeals upheld a permanent injunction against such displays in 2010, finding that the counties acted with an impermissible religious purpose.”

The Ten Commandments are reportedly not a part of a larger display, and so a reasonable observer would view it as an endorsement of religion by the county, FFRF asserts. By placing this display directly inside its governmental offices, the county is unmistakably sending a message that it gives the display its stamp of approval. The government has no business telling citizens which god they must have, how many gods they must have or that they must have any god at all. Trigg County needs to get rid of the display at once.

“How can nonbelievers feel welcome in the Trigg County clerk’s office when they have such an obviously biblical message staring them in the face?” asks FFRF Co-President Annie Laurie Gaylor.

We could also ask: Is there any secular purpose to having that display on the wall? Of course there isn’t. You would never see an equally colorful painting with verses from the Qur’an on the wall.

It’s not even the first time this county has put Christianity over the work of the government. Back in August, a judge refused to conduct a non-Christian wedding ceremony for two atheists.