Christian Pastor: I Resurrected a Dead Woman By “Sending a Text Message Through Facebook”

Why do certain kinds of Christian pastors lie so much — and about such obvious things?

I’m not even talking about the “evolution is a hoax” or “you choose to be gay” lies. But when you tell everyone you healed a dead woman, the skeptic alarms in everyone’s heads ought to be going off.

That’s what Pastor David E. Taylor of the Missouri-based Joshua Media Ministries International claims he did, and all it took was a text: 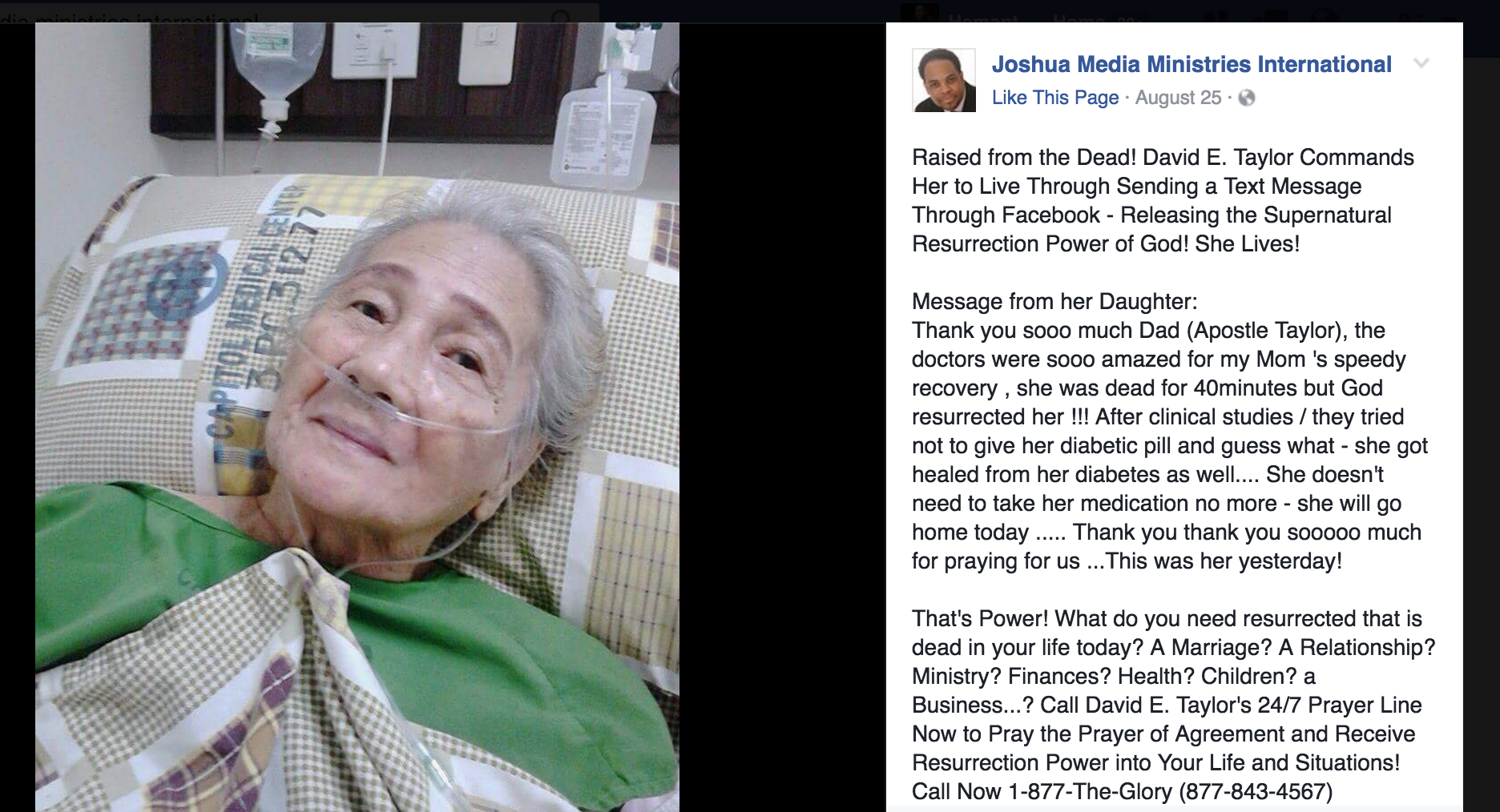 Raised from the Dead! David E. Taylor Commands Her to Live Through Sending a Text Message Through Facebook — Releasing the Supernatural Resurrection Power of God! She Lives!

The unnecessary capital letters mean you *know* this is true.

Oh! And that unnamed woman didn’t just rise from the dead. Her diabetes was gone, too!

Message from her Daughter:
Thank you sooo much Dad (Apostle Taylor), the doctors were sooo amazed for my Mom ‘s speedy recovery , she was dead for 40minutes but God resurrected her !!! After clinical studies / they tried not to give her diabetic pill and guess what – she got healed from her diabetes as well…. She doesn’t need to take her medication no more – she will go home today ….. Thank you thank you sooooo much for praying for us …This was her yesterday!

That’s the grammar of someone who can’t possibly be wrong about anything.

Give some credit to the Christian Post: Reporter Leonardo Blair tried to verify this story. But you can guess how that went…

The Christian Post reached out to Joshua Media Ministries International on Monday and requested an interview with the woman and her family. A representative said they were unable to divulge personal information about the family but explained that they would pass along this reporter’s contact information and would reach out if the family wished to talk.

Don’t wait up for that information…

There’s plenty of reason to doubt this story, but one of the less obvious reasons is that Taylor has already been suspected of deception before. He was the subject of a financial corruption case last year, and his videotaped deposition made everyone’s jaw drop. He couldn’t answer basic questions about someone he claimed as a dependent on his tax returns, claimed that his mansion was really a training center for other pastors, and said he shopped at high-end clothing stores because “Macy’s don’t have the kind of suits that I wear.”

And now he’s healing the dead. That’s what happens when you wear Louis Vuitton, don’t you know.

September 2, 2016
Christian Charity That Rejected Huge Donation From Atheists is Now "Extremely Behind on Funds"
Next Post