Alberta’s Education Minister David Eggen did a wonderful thing a couple of weeks ago when he welcomed students to their classrooms for the new school year. He let LGBT students know that their rights would be respected. That they could begin Gay-Straight Alliance groups if they wanted. That going to the bathroom wouldn’t be a problem. That this wasn’t North Carolina. (Okay, I made that last one up, but you get the idea.) 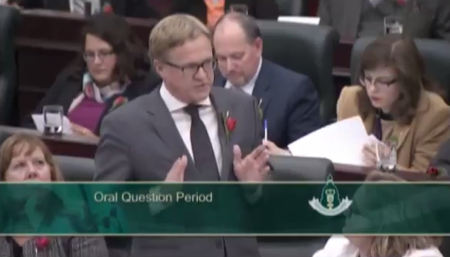 As Minister of Education, I have been working with your school boards to make sure that our schools are welcoming and caring. All boards have created new policies to support LGBTQ students and they will now come to life in your schools.

And remember: I’m with you one hundred per cent.

That’s so kind… and generous… and Canadian.

The problem was that Pastor Brian Coldwell, who heads up the Independent Baptist Christian Education Society which runs two Alberta schools, had no intention of complying with the new guidelines.

You might wonder why that matters, since they’re religious schools. Don’t they operate according to their own rules? Not exactly. 60-70% of the funding for his schools come directly from taxpayers. Because Canada.

Coldwell said students who don’t agree with his board’s conservative Christian values could attend other schools.

“We’re not saying that the gay community doesn’t have any rights,” he said. “But they just don’t have the right to come in here and push their agenda, or what you might call the rainbow ideology.

“There’s a big difference between protecting students and the promotion of a lifestyle.”

Coldwell said his boards’ two schools, Meadows Baptist Academy and Harvest Baptist Academy, have a zero tolerance for bullying but LGBTQ issues rarely arise. He said if a student came looking for help they would use the gospel and Christian counseling.

“I have a duty as a pastor to protect the flock of God,” said pastor Brian Coldwell, chair of the Independent Baptist Christian Education Society, which runs two schools in rural Parkland County with a total of 200 students. “And there is no way under heaven I’m going to allow gay activists to come in here and basically undermine our ministries and our religious freedoms or confuse and corrupt our children.“

Yes, how dare those students demand the right to exist without being harassed? Why would anyone corrupt children by making them more tolerant?! That’s not what Jesus wanted. He demanded that LGBT students undergo conversion therapy. I’m pretty sure that’s in the Book of Matthew or something.

But there is a real tension here. Who wins out? The pro-LGBT rights government or the anti-LGBT Christians? If the Christian schools don’t cooperate, will they be punished?

There was even an online petition calling for the province to defund schools that didn’t abide by the new rules.

The petition may be unnecessary. Liberal Leader David Swann called on Eggen to revoke funding from all Districts that refuse to agree to the new, inclusive rules.

“The legislation, supported by every provincial party, and the policies set forth by the government, were created to provide kids with the right to be who they are,” said Swann. “No organization, especially a school, should have the ability to take those rights away.”

“This is precisely the situation where LGBTQ protections are most needed,” Swann said in a statement. “There is an antagonistic school board and a strong bias against the LGBTQ community.”

Swann also called on Eggen to ban the practice of conversion therapy throughout the education system, after Coldwell said Christian counseling would be used to help LGBTQ students.

Whether the funding will be taken away has yet to be seen, but it may be the sort of pressure the religious schools need to get in line and stop treating LGBT students as if there’s something wrong with them.

Those students shouldn’t have to attend different schools. The administrators should realize, though, that failure to create a safe environment for all students could lead to the loss of a major source of financing. They’re the ones who need help, not the students they demean.

(Screenshot via YouTube. Thanks to Karen for the link)

September 1, 2016
Irony Alert: Insurance Agency Won't Cover PA Church Damaged in Flood Because It Was An "Act of God"
Next Post

September 1, 2016 There's No Crusade Against Christians on Campus
"As I understand it the use of plural pronouns is because we don't have a ..."
NoOne of Consequence Why Did Amazon Remove Reviews of ..."
"That sounds like a Trumpian nickname."
Jezebel'sOlderSister Scott Lively: God Let Trump Lose ..."
"Hemant, please let us know if she shares with you the justification letter. Sure, it'll ..."
eric Why Did Amazon Remove Reviews of ..."
"https://uploads.disquscdn.c..."
cdbunch Televangelist: Anyone Watching This Video is ..."
Browse Our Archives
What Are Your Thoughts?leave a comment