We recently learned that Lyle Jeffs, brother of Fundamentalist Church of Jesus Christ of Latter-Day Saints leader Warren Jeffs, escaped from authorities before the start of his fraud trial. His defense attorney suggested in a court filing, perhaps jokingly, that he had been raptured.

That’s great fodder for Stephen Colbert, who had plenty to say last night about Jeffs’ escape, including the theory that he used olive oil to slip the ankle monitor off his body: 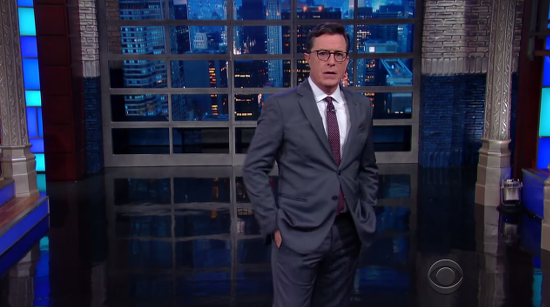 I doubt God will find Jeffs. I mean, Jesus was supposed to return a long time ago, but no one can find Him, either.

September 1, 2016
Donald Trump's "Ideological Certification" for Immigrants is a Horrible Idea That Would Never Work
Next Post

September 1, 2016 Irony Alert: Insurance Agency Won't Cover PA Church Damaged in Flood Because It Was An "Act of God"
Browse Our Archives
What Are Your Thoughts?leave a comment