Evolution is More Beautiful and Accessible Than Ever in a New Children’s Book September 1, 2016 Tracey

The best children’s books are the ones that an adult not only enjoys reading to a child, but also teaches them something new. That’s the case with the evolution-themed Annabelle & Aiden: The Story of Life. As an avid collector of children’s books, this is the most scientifically thorough and visually satisfying example I’ve ever seen in an under-represented category. 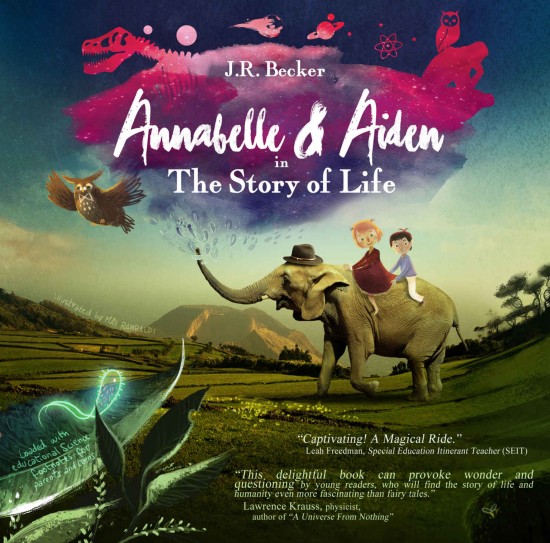 Author J.R. Becker writes poetically about Annabelle and Aiden, two kids who curiously peer into a pond at their own reflections, wondering why their bodies have the characteristics they do. A wise owl sits in a tree above, guiding them towards the answers.

With a nod to the struggle science communicators face against willful ignorance, the owl cannot just stand by as the kids put forth nonsensical theories:

“Just say it was magic,” Aiden said with a smirk.

The wise owl answered, “Then how will you learn? We live to discover,” he said with concern.

The wise owl then sweeps the children away on a journey from the beginning of time. Gazing on at nebula, galaxies, and billions (and billions) of stars, he begins the story from as far back as we know.

From there, we’re taken to the ground level of Earth as it stirred over 3.6 billion years ago.

that ever came to be!

It looked all around,

and what did it see?

A beautiful world of

but it was all alone.

We move forward with the characters from the appearance of the first organism through an intricate yet digestible lesson on reproduction and natural selection, as some species branch off and venture out of the water, until eventually ending up at the forms we know today.

As undeservedly taboo as it may be, the evolution of mankind is shown unabashedly in a cartoony recreation of the iconic “March of Progress” display (despite the flaws with that image). In a comical subtext explaining the accomplishments of each evolved species, Homo sapiens get the following designations: “Invented Spam, dental floss, and sleeping late.”

Information is paired with supporting evidence, as with the examples of whale leg bones (which tells a tale of their land mammalian past) and humans with our many vestigial features (goosebumps, gills, and wisdom teeth).

Every page includes faintly written suggestions for older children and adults who would like to veer off the main text to learn even more. For those of us who had teachers who avoided controversy entirely by skipping evolution or, worse, used faith-based textbooks, our real “aha!” moment about the origin of life didn’t come until we sought it on our own — or took Biology 101 in college. But no matter your background, it’s almost certain, unless you have a biology degree, you’ll close the book having learned something interesting.

When Becker’s book first caught my attention, it was the delightful artwork that drew me in. The illustrator, Max Rambaldi, creates charming, quirky settings reminiscent of ’60s illustrators Gyo Fujikawa and Jan Marcin Szancer. Her use of earth tones spotted by glowing bright white and yellow adds a modern finish to a vintage palette that contrasts playfully with the plunge of hyper-colored ocean that appears with the turn of the page.

Annabelle & Aiden is a story that inquisitive children will find enchanting as they experience the wonderment of evolution. It teaches them that no question is too big to dig your heels into, included the big ones about our own origins.

Although we have yet to discover everything, and likely never will, a book like this will inspire future scientists to do whatever they can to close those knowledge gaps.

Annabelle & Aiden: The Story of Life is available in paperback and for Kindle.

September 1, 2016
American Family Association: The NFL Must Punish Colin Kaepernick For Being a Patriot the Wrong Way
Next Post

September 2, 2016 The Big Question Lab: Helping Children Answer Their Own Difficult Questions
Browse Our Archives
What Are Your Thoughts?leave a comment