While Donald Trump‘s immigration speech last night was horrific for a number of reasons, one of the many disturbing aspects involved his plan to impose “ideological certification” on people entering the country. It should frighten anyone who supports freedom of speech, especially those of us known for spreading unpopular ideas. 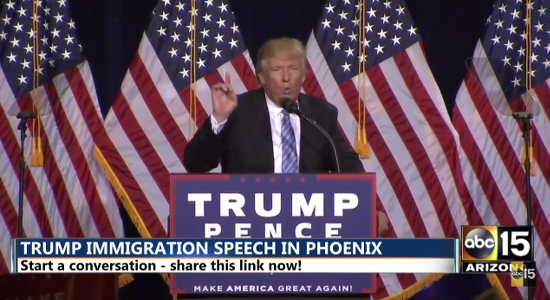 Another reform… involves new screening tests for all applicants that include… an ideological certification to make sure that those we are admitting to our country share our values and love our people.

… Applicants will be asked their views about honor killings, about respect for women and gays and minorities. Attitudes on radical Islam, which our President refuses to say and many other topics as part of this vetting procedure.

We don’t want terrorists, murderers, and criminals to enter the country, obviously, but how would Trump’s ideological test work?

If Colin Kaepernick were a Mexican immigrant, would he be allowed to enter the country even if he didn’t want to stand during the National Anthem?

What counts as respect for women and gays? Hell, most of the Republican Party, including Trump’s running mate Mike Pence, arguably have no respect for those groups given that they pass laws to oppress and control them. Would they be allowed into the country? What attitude about women and gays does Trump think we’re supposed to have?

Knowing what Trump has said about minorities, would he be allowed in this country?

I’ll go ahead and add something really controversial: Just because someone thinks “honor killings” are a good idea, so what? I find it hard to get worked up over thought crimes. There’s a difference between thinking something awful and actually going through with it.

As atheists, we ought to be especially worried about the idea of people being punished for thinking the “wrong” way. There are people in this country who think we’re inherently unpatriotic for denying Christianity, or not standing for the Pledge of Allegiance, or fighting for church/state separation. Is Trump going to deport people like us?

That’s the problem with ideological testing. Whose ideology counts as the default “American” one? And what’s stopping immigrants from, you know, lying and just saying whatever a Trump administration wants to hear?

It’s a completely untenable policy. Our First Amendment allows for ideological diversity and that’s a wonderful thing. No one deserves to be punished for thinking the wrong way, including immigrants trying to make their way into the country.

If we don’t have freedom of conscience, what sort of country would we be?

September 1, 2016
A Cruel New Twist to the Trolley Problem
Next Post

September 1, 2016 Stephen Colbert Mocks Olive Oil-Fueled Escape of Polygamist Lyle Jeffs
"I’m not sure about that. I’m trying something new.Gender is defined as “ the characteristics ..."
Sastra Should Two Oregon Educators Be Fired ..."
"Hendrix could, or at least chop it down with the edge of his hand."
Zizzer-Zazzer-Zuzz Christian Nationalist Preacher: God Will Soon ..."
"Da Jooze.Just say “the Jews” and be done with it, you anti-Semitic scumbag."
kaydenpat Rick Wiles: A “Satanic Zionist Power” ..."
"The antisemitism is ever far from the surface with this crowd. They claim to support ..."
Houndentenor Rick Wiles: A “Satanic Zionist Power” ..."
Browse Our Archives
What Are Your Thoughts?leave a comment