American Family Association: The NFL Must Punish Colin Kaepernick For Being a Patriot the Wrong Way September 1, 2016 Hemant Mehta

American Family Association: The NFL Must Punish Colin Kaepernick For Being a Patriot the Wrong Way

The American Family Association is furious that NFL star Colin Kaepernick is exercising his right to stay seated during the National Anthem and condemn police brutality, so they’re calling on the NFL to discipline him: 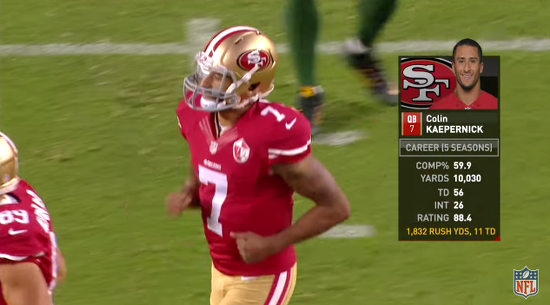 As a player who wears a professional football uniform, Kaepernick is a public representative of the National Football League and the San Francisco 49ers football team. His actions continue to embarrass all professional sports and bring reproach on his team.

America is also stunned at his overt disrespect for the nation that guarantees him the freedom to earn millions of dollars each year.

It is important for the NFL to take necessary steps to insure that its players, coaches, and teams show proper respect for our country and our police officers. If Kaepernick is allowed to continue his deeply offensive actions, it will only lead to other such movements by other players in the future.

Oh no! Not more players thinking for themselves and taking a stand! Individualism goes against everything conservative Christians believe!

By the way, America isn’t “stunned at his overt disrespect.” The only people upset by it are the ones who cling to symbols of patriotism as substitutes for actual patriotism. But it’s just like a Religious Right group to assume they speak for everyone. They’re the ones, after all, who claim to know what “family values” are, even though my family and plenty of others find their bigotry abhorrent.

It’s also telling that Kaepernick’s civil disobedience is what’s setting them off. There are NFL players guilty of domestic violence, which you’d think would be a bigger stain on the NFL’s image, but this is what they’re mad about.

Because True Patriotism™, as we all know, involves mandatory participation in optional rituals. (And telling trans people they can’t pee in public.) Anything less is an assault on Jesus.

Kaepernick has plenty of support for his actions, including from veterans who are using the hashtag #VeteransForKaepernick. When’s the AFA going to tell the troops they’re being disrespectful to the country?

And keep this in mind: You’ll never see the AFA calling for a boycott of the NFL until they discipline Kaepernick. Because even Christians aren’t about to reject football just because the AFA is throwing another tantrum.

(Screenshot via YouTube. Thanks to Cozmo for the link)

September 1, 2016
Christian Charity Rejects Atheist's Money Again, So He'll Give It All to Camp Quest Oklahoma
Next Post