Last week, conservative talk show host Neal Larson was fuming in a column for the Idaho-based Twin Falls Times-News because, despite the United State’s dominance at the Summer Olympics, Neil deGrasse Tyson was tweeting about how awful we were doing. 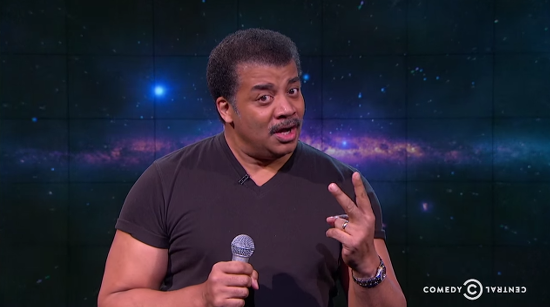 “The USA has 3x as many Olympic golds as Hungary, but 30x the population. Adjusting for this, Hungary is kicking our ass.”

Surely he must be a hit at parties. I don’t know how he does it, but Tyson manages to simultaneously be both an astrophysicist … and a jackass. What, precisely, is he attempting to do other than spew out a drive-by pot shot at America, with a fourth-grade math observation mixed in? If this is the arithmetic of an astrophysicist, I’ll tell my 10-year-old to just be snarky and anti-American as well, and she too could be the next overpaid, unscrutinized, and overestimated academic fawned over by the media and the left.

First of all, Tyson is a hit at parties.

But beyond that, the observation wasn’t wrong! We have a lot of citizens, so of course we’re going to do pretty well.

I’ve listened to Neil deGrasse Tyson before. And what I observe is a smart guy who consistently enjoys asserting his intellectual supremacy over others more than he actually likes educating. In one of his worse moments, Tyson mocked a 12-year-old girl who suggested she’d like to live on Jupiter. He ridiculed her in the midst of a crowd, then later, several times, on Twitter. That told me everything I needed to know about Neil deGrasse Tyson.

For that moment he was just a horse’s astrophysicist.

This is what a typical conservative blowhard sounds like. Tyson being clever or witty is just a way to prove he’s better than you. How dare he educate others by making them think?

But the kicker was that bit about Tyson mocking a little girl. Because if you’ve ever seen Tyson speak to a child, you know he encourages their curiosity and speaks to them intelligently. Mocking isn’t what he does. So where did that story come from?

So this entire tirade was a rant against a really smart guy for being clever… and the justification included a bullshit article that Larson didn’t even bother to fact-check.

What made the whole episode even more entertaining was that one of the commenters was none other than Neil deGrasse Tyson. It’s a long response, but here’s a bit of it:

… you abrogated your journalistic integrity by not verifying what you read in somebody else’s article, before using it as a foundational pillar in yours.

6) I am 3x appointed by President George W. Bush, serving on commissions to advise him on the future of the American aerospace Industry, on NASA, and on the annual Presidential Medial of science winners. So your disapproval of my views is not shared by others on the conservative spectrum.

7) Lastly: my research output as a scientist is not hidden. You can find it here, if you are interested: http://www.haydenplanetarium.org/tyson/curriculum-vitae

So when you factor in (or simply subtract) all these elements from your writeup, If what remains still justifies labeling me a horses astrophysicist, then, as I said, I’m okay with that.

The internet broke after that, with people rightfully criticizing Larson for his awful, lazy, fact-free column.

It now looks like it took a heavy toll on Larson because his latest column is all about how he’s done writing columns.

… For those who may not have heard, famed astrophysicist Dr. Neil deGrasse Tyson schooled me in an online reply to my column about him: “Neil deGrasse Tyson is a horse’s astrophysicist.” In the rush to get the column finished, days before, I sloppily and irresponsibly referenced a fake news story from a fake news site. Stupid mistake on my part, for which I have apologized publicly. Additionally, I have apologized to Dr. Tyson for using the story and mischaracterizing him as an atheist. And I add to that an apology for my less-than-mature equine reference, intended more as a clever play on words than a harmful insult. I, indeed, was the horse’s ass.

The rest of the column is a woe-is-me outpouring of how mean everyone is online. He’s upset none of the bigger media entities writing about how Tyson crushed a conservative columnist reached out to him for comment. He’s upset people called him names online. He’s upset writing is now hard because he’s afraid of the backlash.

To a point, I understand his frustration. When you spend your time offering opinions for a living, the backlash is always fierce. (And he’s not even a woman or a minority.) But when he offers bad opinions with unearned confidence, what else would he expect? Larson works in conservative talk radio. If anyone should understand people saying idiotic things not based in fact, it ought to be him.

I’m surprised he has such thin skin. When you make a dumb mistake, the best thing to do is apologize publicly — and quickly — and do your best to make sure it doesn’t happen again. But while some of the backlash Larson received was admittedly over the top and indefensible, most of it was deserved. And Tyson’s response was just the mic drop that sweetened the story.

As one commenter underneath his column noted, if Larson can’t handle this incident, what does he think of President Obama, who has had to endure the lies and smears and name-calling from other conservatives in the media for the past decade?

Well, Larson won’t be missed. He still plans on continuing his radio show, where he can spread his wisdom. Like when he said the Washington Redskins’ mascot is better than a “screaming Black Lives Matter activist or a finger-snapping drag queen.”

August 31, 2016
Open Atheists Running for Office Had a Great Night in Their Arizona and Florida Primaries
Next Post

August 31, 2016 Texas District Attorney Nico LaHood: "Vaccinations Can and Do Cause Autism"
"The Leopards Eating People's Faces party has recruiters on campus!"
democommiescrazierbrother Christian School Expels 8-Year-Old Girl Who ..."
"Probably the only thing that could prevent that from eventually happening, other than Poland ceasing ..."
CriticalDragon1177 Despite Massive Protests, Poland’s Near-Total Abortion ..."
"Kunneman probably thinks 'The Flintstones' is a documentary if he believes there ever was a ..."
David Cromie Preacher: Trump Will Still Win! We ..."
"You know, I don't think I've ever seen a dog challenge the authority of his ..."
cdbunch Christian Mommy Blogger: Hit Your Kids ..."
Browse Our Archives
What Are Your Thoughts?leave a comment