(They didn’t debate their religious differences.) 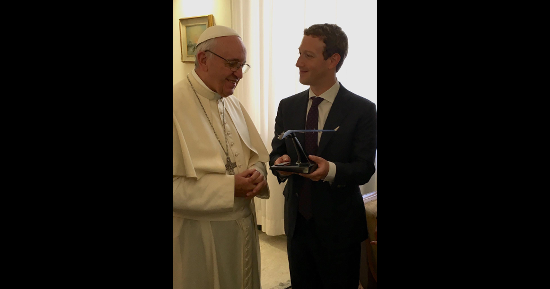 Priscilla and I had the honor of meeting Pope Francis at the Vatican. We told him how much we admire his message of mercy and tenderness, and how he’s found new ways to communicate with people of every faith around the world.

We also discussed the importance of connecting people, especially in parts of the world without internet access. We gave him a model of Aquila, our solar-powered aircraft that will beam internet connectivity to places that don’t have it. And we shared our work with the Chan Zuckerberg Initiative to help people around the world.

It was a meeting we’ll never forget. You can feel his warmth and kindness, and how deeply he cares about helping people.

There should at least have been as asterisk at the end there, since the Pope’s warmth and kindness don’t extend to the transgender people he believes represent an “annihilation of man as image of God” or the gay and lesbian couples whom he believes are inferior to straight couples…

But. Setting aside valid criticisms of the Pope, the bigger picture here is that two very powerful people spoke about their common goals and how they could best achieve them, and it happened by setting aside their religious beliefs. There’s so much good they could do by teaming up, and I’d like to think this photo-op will lead to greater cooperation for the greater good. After all, both men have professed their desire to help the less fortunate.

Or maybe the Pope can sign a pledge to give away 99% of the Vatican’s worth to charity.

August 31, 2016 Oklahoma Man Says Library Ad Featuring Muslim Woman is Illegal Promotion of Islam
Browse Our Archives
What Are Your Thoughts?leave a comment