Texas District Attorney Nico LaHood: “Vaccinations Can and Do Cause Autism”

Back in March, there was a big kerfuffle at the Tribeca Film Festival because one of the movies selected for the prestigious event was an anti-vaccination propaganda film called Vaxxed: From Cover-Up to Catastrophe. The film was removed from the lineup after strong backlash.

But the film is still out there, and one of its more vocal supporters is Nico LaHood, the Bexar County District Attorney (in San Antonio). He saw the film and then taped a promotional video for the producers. Listen to a brief clip that was posted online: 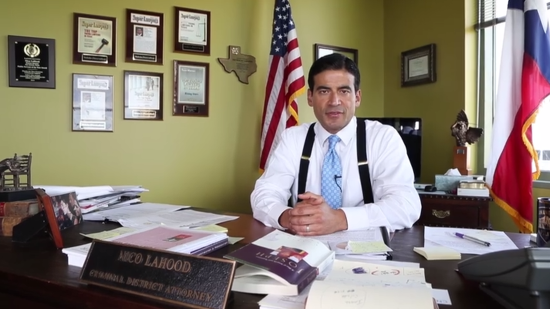 “I’m Nico LaHood. I’m the criminal district attorney in San Antonio, Texas. I’m here to tell you vaccines can and do cause autism.”

There’s no evidence for that dangerous and misguided claim.

The clip is a teaser for this segment which also included his wife Davida:

What’s really disturbing in that clip — besides simply all of it — is that LaHood makes clear he’s all about evidence:

“… what I do is I follow evidence. I’m an empirical data guy. If you show me evidence… give me objective evidence, I’m gonna do right with that information because I gotta present it to a jury and persuade them to go my way because I believe that I’m doing what’s right.”

If he believes the sort of faulty, debunked claims of the anti-vaccination movement, what does that say about the sort of work he does as a prosecutor? He’s basically going on camera and telling the world he believes any conspiracy theory even if the experts reject it completely!

The crux of the story is that his child “changed” after receiving a vaccination, leading him and his wife to believe vaccines were the cause of that change. Scientists have looked at that supposed link for decades and found nothing to link the two. The studies which have suggested that link have later been shown to have fundamental errors in methodology or analysis.

Despite say how much he “hates deception,” his stance is no different from that of Jenny McCarthy and all those other not-scientists who have been duped by Andrew Wakefield and other discredited researchers.

And just to point out the obvious: LaHood isn’t a scientist. He thinks he’s qualified to judge evidence, but he clearly isn’t. I half-expect his next gig to be appearing on a documentary telling you “aliens did it.”

But this is how good propagandists operate. They sound convincing. They sound non-partisan and non-biased, but they don’t understand the issue at its core. That’s why I wouldn’t go so far as to say LaHood is lying. I think he genuinely believes vaccines cause autism, and that’s why he’s able to speak to that so convincingly.

The problem is that he’s wrong. All the evidence, when weighed by people who are actually qualified to study it, points in the opposite direction. LaHood won’t change his mind, though, no matter what he says about following the evidence. His pride is on the line and he doesn’t give a damn how many children will suffer because their parents refuse to vaccinate them. It’s a dangerous game he’s playing as a result of his ignorance.

August 31, 2016 Bill Nye Will Soon Have a Science-Themed Talk Show on Netflix
Browse Our Archives
What Are Your Thoughts?leave a comment