If you saw a police car with the words “In God We Trust” on the side, you’d rightfully call that a promotion of religion, even if the sheriff claimed (with fingers crossed) that it was all about the National Motto.

If you saw a fire truck with the Pope giving a thumbs up sign, there’s no doubt that would be religious. (And very odd.)

Now what about this image, which is one of many similar images advertising the Pioneer Library System in Oklahoma? 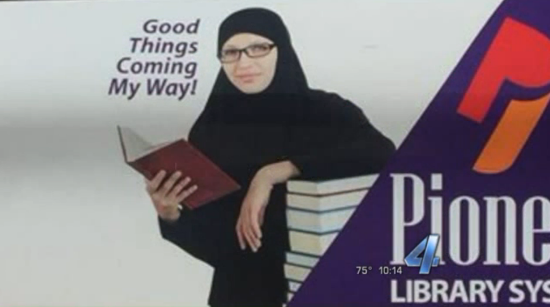 That would be a Muslim woman reading… which Chad Grensky claims is a promotion of Islam:

Grensky feels the hijab or veil represents the Muslim faith and wants the picture removed.

The veteran said he wants to make it clear he is not racist and does not have a problem with any peaceful religion.

“What I have a problem with is we can’t put a nun on the side of that car because she’s wearing a head garment,” Grensky said. “We have to remove ‘In God We Trust’ from our police cars.”

At least he’s consistent about eliminating all religious imagery… But I’ll take issue with his logic there. A nun is a religious leader. This woman wearing a hijab is nothing more than a Muslim woman trying to read a goddamn book.

Grensky is looking for a problem that’s not there.

For what it’s worth, the state’s ACLU director also says there’s nothing to complain about. Showing someone in religious attire doesn’t mean you’re promoting their religion.

August 31, 2016 Here's How an Off-the-Grid Homeschooled Christian Girl Escaped Her Parents and Became a Legal Human
"So do I have no responsibility to others? I can do with my body whatever ..."
SJH GOP Senator to Biden Department of ..."
"The right of man in fart in small enclosed spaces goes back centuries."
muttpupdad TN Health Official: GOP Governor’s Christianity ..."
"[They're looneys]!"
Rob P Christian Hate Group Loses Appeal Challenging ..."
""You are under arrest for the sin of murder.""
Edward K. Grand Rapids (MI) Cops Have Formed ..."
Browse Our Archives
What Are Your Thoughts?leave a comment