A retired Catholic priest in Council Bluffs, Iowa, was recently charged with five counts of invasion of privacy after allegations arose that he watched several students use the restroom at a high school track meet last April. Paul Monahan, the accused clergyman, retired in 2004 and has served as a school chaplain during his retirement. 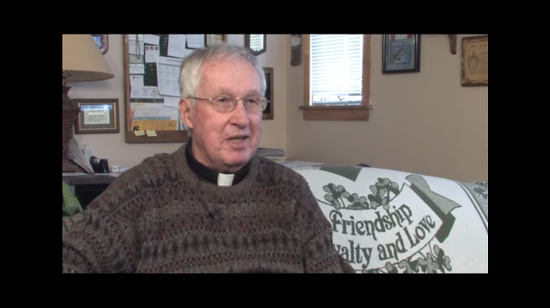 “The diocese’s first priority must be in creating a safe environment for children,” the release reads.

Diocese of Des Moines Bishop Richard Pates suspended Monahan on July 8 after learning of the investigation. The suspension will remain in place until the case is resolved by authorities.

While the issue of priests illicitly interacting with young males is hardly (and sadly not) a novel discovery, these allegations reveal a particularly fascinating dimension to cases involving small town religious officials: investigators say Monahan is so well known in the community that the attorney general must conduct the investigation in order to avoid any conflicts of interest. Perhaps as expected, the local diocese has deflected responsibility and suggests prayer is useful to help all those involved cope:

On behalf of the Diocese of Des Moines, Bishop Pates extends apologies to those who perceived violation of privacy. He urges prayer for all involved, including Father Monahan. He stated: “We must allow the law to run full course before further steps are taken by Church authorities.”

Those working on this case have yet to determine the extent to which any wrongdoing might have taken place, but the general situation is eerily familiar. Small town parish. Vulnerable young parishioners/students. Assumed infallibility of a religious leader. Bravo to the authorities for recognizing how Monahan being deeply ingrained in the community poses a serious problem for conducting legal investigations (though the fact that praise is needed here is itself a concern). Beyond the guilt of this priest, the real question remains of just how often authorities don’t take extra measures to account for a religious figure’s popularity.

As a former Iowa Catholic school attendee myself, the details here are somewhat familiar to me. When I was a pubescent male, I found it was fairly common for priests to seem a bit too friendly with me and my friends. Though, as far as I could tell, my former church leaders never did anything that entirely crossed the line (let alone broke the law), I know all too well how teenage boys like to speak out against authority. Sometimes that might even mean embellishing an unexpected visit to the restroom as something more grotesque or sinister.

The problem with this “boys will be boys” attitude is that it is simply victim blaming. While it was easy for a teenage boy like me to jokingly suggest an extroverted priest was a child molester, to actually have the audacity to lie (or even risk being mistaken) to school administration or the police was almost unthinkable. Especially in small towns, there is little escape from the purview of religious leaders, even outside of the church. Even the most naïve student in a religious school likely knows that lying to accuse a popular chaplain of a crime will essentially mark the end of your childhood. And when it comes to defending one of their own, Catholic clergy have little hesitation in typecasting their young churchgoers as deviant souls in order to avoid a lawsuit.

It is difficult to tell if victim blaming is at play in these allegations, though it would not be surprising if Monahan’s legal defense relies on the classic ageist trope of “oh, they’re just kids, what do they know?” Hopefully everything is resolved fairly and painlessly. And more ambitiously, let’s hope this type of behavior is a fading trend.

August 30, 2016 Everything in the Bible... in 30 Seconds
Browse Our Archives
What Are Your Thoughts?leave a comment