That’s what Brice Ehmig, a student at Florida Gulf Coast University did last week when she brought out her bagpipe in response to an anti-gay campus preacher. 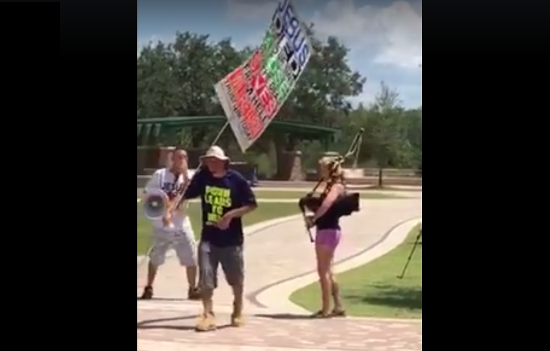 Brice, originally from Dunedin, Florida, said: “I have seen too much tragedy in the LGBTQ community to let a man in cargo pants tell me I am the embodiment of sin.

“I am a gay bagpiper and I’m proud.

“I decided since this is my last year at university that I should do things that make me feel brave.

After the video ended, she called her girlfriend/camerawoman over and kissed her right in front of the Christian bigot.

It’s not the first time bagpipes have been used to drown out preachers. It happened in Scotland just last year.

It’s a wonderful tactic, too, since what are the preachers really going to complain about? That they don’t like what they’re hearing? That the noise overpowers their own words? Welcome to our world.

The only thing that would make this story better is if Christians had the courage to do the same thing instead of letting this preacher spew hate on behalf of their faith.

August 30, 2016
Kevin Sorbo's Next Project? A Film About the "World's Greatest Atheist" Converting to Christianity
Next Post

August 30, 2016 Retired Iowa Priest Charged with Watching Students Use Bathroom During Track Meet
Browse Our Archives
What Are Your Thoughts?leave a comment