Donald Trump Ran for President Because He (Wrongly) Thinks the White House Has a “Holiday Tree” August 28, 2016 Hemant Mehta

In an interview with Christian televangelist James Robison, Eric Trump explained a few of the reasons his father chose to run for President… including the flat-out lie that the White House’s Christmas Tree is now called a “Holiday Tree.” 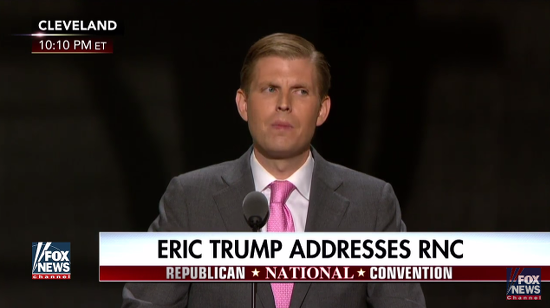 … At the same time, he opens up the paper each morning and sees our nation’s leaders giving a hundred billion dollars to Iran, or he opens the paper and some new school district has just eliminated the ability for its students to say the pledge of allegiance, or some fire department in some town is ordered by the mayor to no longer fly the American flag on the back of a fire truck. Or, he sees the tree on the White House lawn has been renamed “Holiday tree” instead of “Christmas tree.” I could go on and on for hours. Those are the very things that made my father run, and those are the very things he cares about.

So… Donald Trump wanted to run for President because he fell for conspiracy theories. This is hardly news — we’re talking about the Birther-in-Chief here — but it’s incredible that anyone believes this nonsense.

No school has ever stopped students from saying the Pledge. At “worst,” they replaced it with a moment of silence or did away with a formal ritual, but no student is prevented from saying it.

We’ve heard this same kind of batshit rumor before when people say kids are prevented from praying or reading their Bible in school. Never happened. They are welcome to pray on their own time. They can read the Bible whenever they want. As long as they’re not disrupting their peers and doing the work they need to be doing in class, neither one is an issue, and atheists will defend those rights.

And what about the “Holiday tree,” which is apparently one of the biggest problems this country faces?

Chain emails that began when President Obama took office falsely claimed that tree had been renamed. A tree on Capitol Hill was briefly called a “holiday tree” in the ’90s, but the name was changed in 2005 at the direction of then-Speaker Dennis Hastert.

By that logic, Trump could’ve run against George W. Bush for the same faulty reasoning…

Is Todd Starnes now an advisor to the Trump campaign?

Robison, not surprisingly, didn’t challenge any of Eric Trump’s statements. He just accepted the lies and moved on to the next question.

Maybe the most disturbing thing about all this isn’t that Donald Trump just accepts conspiracy theories as facts because “some people” say things to him. It’s that these silly rumors are enough to make him want to run for President. He’s not driven by major policy differences with the current administration. He’s not driven by the pursuit of his own big ideas, because he doesn’t have any.

He’s driven by a false sense of “political correctness.” And Republican Party leadership still can’t bring themselves to disavow his candidacy.

August 28, 2016 He Started a Religion of Peace. Join It or Die.
"Or The Bay."
muttpupdad Nova Scotia Church Fined Over $74,000 ..."
"It's gotta be much easier if you only have one Testament's worth of self-serving BS ..."
BeaverTales II - ✓ᵛᵉʳᶦᶠᶦᵉᵈ Survey: Jewish Americans Are More Secular ..."
"waiting for the Lorraine vaccine ...."
maddog7 Conspiracist: The Unvaccinated Are Being Treated ..."
"My friend hated nuns--she had gone to Catholic school. I love Gregorian chant--I'm Jewish--and we ..."
Karen Silver Christian Hate-Preacher: The Pope is the ..."
Browse Our Archives
What Are Your Thoughts?leave a comment