If you’re Bernie Sanders, how do you capitalize on everything you’ve achieved this election season? You get as many people as possible who share your liberal views to pledge to run in local, state, and federal elections in 2018. Will almost all of them lose? Hell yes. Badly, in many cases. But maybe a few break through. Maybe, in time, more follow. That’s how you achieve serious, long-term change. (Sanders is trying. It’s not going so well.)

If you’re an atheist, how do go from having virtually no political clout to maybe getting the percentage of open atheists in Congress to a mind-blowing 1%? You start running for office at local and state levels. Win some elections. Build your political profile. Make your atheism public, but make it the least interesting thing about you.

And guess what? There’s a movement to do just that in Arizona right now, and it’s led by two young activists: 27-year-old Evan Clark and 37-year-old Serah Blain. If those names are familiar, it may be because they worked on James Woods‘ (unsuccessful) race for Congress in 2014. They run a consulting firm called Spectrum Experience and they have several openly non-theistic candidates they’re working with this year. 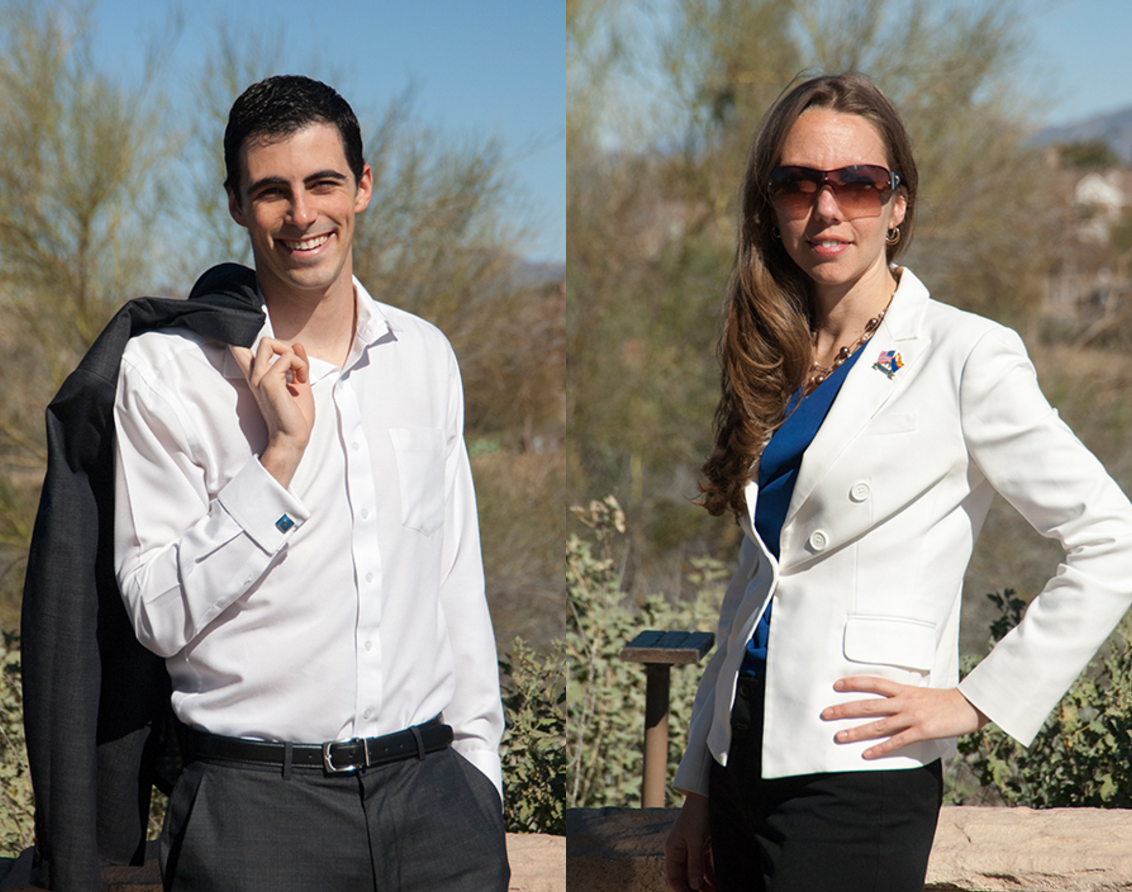 We’ve mentioned all of them running for statewide or national offices on this site already, but Kimberly Winston has some great insight into the two people making atheists a political force:

On the night Woods lost, Blain received condolence calls from secular activists all over the country. She was too busy partying to take them, celebrating the result as a milestone.

“I think it started a precedent in Arizona,” she said a week before the upcoming primary over an enchilada lunch. “It broke the glass. And that was the point. In a lot of ways it was a giant PR stunt to bring forward issues that we care about and get them discussed.”

Pushing away her half-eaten plate, Blain added: “This time is different. Things have changed.”

Things have changed. While most of the candidates they’re working with have a slim to none chance of winning their races, in part because they’re running in deeply red districts, they’re making it much less controversial for an open atheist to run in the future. And in some cases, the openly non-theistic candidates have a solid chance of winning. Juan Mendez is a current State House member running for a seat in the State Senate. His House seat could go to another atheist, Athena Salman.

None of these candidates are running on their atheism. They’re not trying to eradicate religion or tax churches or force pastors to marry gay people. They’re just progressives who aren’t afraid of saying the A word. Or Humanist or whatever label they choose.

Evan and Serah are leading a revolution in how atheists are running for office. It doesn’t matter that many of their candidates may lose. It’s hard to win these races no matter where you are! The point is that they’re convincing candidates to run for office and be open about their non-theism. What a huge change that is. What an amazing thing it would be if we had political strategists like them in every single state.

We’ll be following ever single open atheist candidate at the state and federal level as they go through their primaries (and beyond). That includes this Tuesday in Arizona.

August 27, 2016
Reminder: Sacrificing an Animal to God Will Not Prevent You From Getting Food Poisoning
Next Post

August 27, 2016 Colin Kaepernick Shouldn't Be Criticized for Sitting During the National Anthem
"Some of the rioters took down the American flag outside the Capitol Building, and replaced ..."
Akira625 There’s Video of Christian Terrorists Praying ..."
"There'd be no one left to run the Church."
Joan D'Ork (Gonzoline) Catholic Priest Attempts to Thwart Electoral ..."
"Christian terrorist is a fact staring you in the face, and which like other evangelicals, ..."
BensNewLogin Michael Brown: Just Because Christians Rioted ..."
"The Catholic Church never stops until it has tried one easy thing."
Synfandel Polish Women Begin Trial for Depicting ..."
Browse Our Archives
What Are Your Thoughts?leave a comment