In a frightening story out of Las Vegas, a 24-year-old “Christian Warrior” named Bryce Cuellar was arrested after posting a YouTube video detailing how he was going to kill “gays, faggots, lesbians and satanists.”

His Facebook page was similarly full of aggressive and violent rhetoric, and his YouTube page is full of so many conspiracy theories, you’d think he was one of Donald Trump‘s advisors. What’s scary is that it wasn’t all just talk. 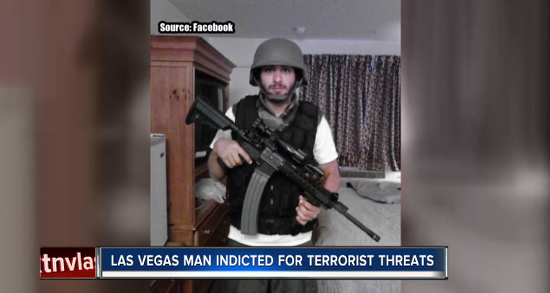 An hour after Cuellar posted the video, police say he attacked his wife, punching her and causing her to fall to the ground. He then jumped on her and began choking her and telling her that he was going to kill her.

During an interview with Cuellar, he admitted to making the video and says that he was angry and drunk. He also told police that he knew he had screwed up with the video and that he is not a murderer.

Well, he was sober enough to put on a costume and work a video camera… If the arrest prevented him from doing something far worse than making a video, we should be grateful he was caught. He seems like the perfect example of someone who shouldn’t have access to murder weapons. Cueller’s bail is set at $100,000 and he’ll have another hearing on September 1.

Now should we assume Trump will kick all Christians out of the country before letting them back in following some extreme vetting?

August 27, 2016
Bill Nye Explains Why He Doesn't Believe in Ghosts and the Afterlife
Next Post

August 27, 2016 Will AR Legislator Pay the Legal Fees if His Christian Monument is Declared Illegal? He Won't Say
Browse Our Archives
What Are Your Thoughts?leave a comment