Burkini Ban Struck Down in One French Town, But the Anti-Muslim Bigotry Persists in Others August 26, 2016 Hemant Mehta

Burkini Ban Struck Down in One French Town, But the Anti-Muslim Bigotry Persists in Others

A French court today struck down a burkini ban in the town of Villeneuve-Loubet, a sign that the nearly two dozen other places where the ban is in effect, including Nice, may have to alter their policies or lose a legal battle. At least I hope that’s the case. 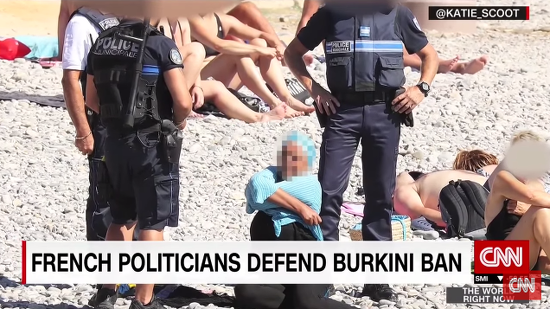 It’s the right decision by the court. As many have pointed out, challenging Islamic extremism, which officials say forces women to dress a certain way, cannot be countered by secular laws that tell those same women they can’t dress a certain way.

Burkinis are not the problem. Women enjoying themselves on a beach aren’t the problem. And if French authorities are so damn worried about terror, they should invest in security, not dress codes.

The International Humanist and Ethical Union issued a statement earlier today (before the court made its ruling) arguing against such bans:

… the right way to police the risk of “public disorder” cannot consist in an attempt to erase all the signals of difference, or to victimize innocent people making personal choices that in no way compromise the rights and liberties of others.

The right way to combat intolerance is to instil tolerance. It is not to attempt to render the perceived problem invisible.

The law should protect liberties despite potential offence, potential backlash, or hypothetical disorder borne of intolerance. Instead, the burkini bans are institutionalising a social backlash against innocent Muslims.

Secularism has been an inspiration around the world; properly understood it is the best framework in which to ensure liberty, equality and human rights for all. The burkini bans devalue and debase France’s grand contribution to the world’s understanding of secularism, and should be overturned as soon as possible.

IHEU adds that you don’t have to ban burkinis in order to criticize them and what they stand for. They welcome that dialogue. But punishing women who have done nothing wrong is not the way to fight back against Islamic radicalism. If anything, it just feeds into extremist ideology, giving Muslims a reason to push back against Western culture.

August 26, 2016
Baptist Convention Leaders Are "Losing Sleep" Because Kansas City Taxpayers Won't Give Them $65,000
Next Post

August 26, 2016 Quackwatch.org Survives Defamation Case As Judge Rejects Claims of Two Anti-Aging Doctors
Browse Our Archives
What Are Your Thoughts?leave a comment