$28,280 Later, An Atheist Has Ended His Fundraiser for a Christian Charity That Won’t Take His Cash August 26, 2016 Hemant Mehta

$28,280 Later, An Atheist Has Ended His Fundraiser for a Christian Charity That Won’t Take His Cash

It seems like the story of an atheist donating to a Baptist-run children’s charity is coming to an end.

Last we heard, after the Murrow Indian Children’s Home rejected a $100 donation from Matt Wilbourn on behalf of the Muskogee Atheist Community (which he and his wife Keli co-founded) saying “it would go against everything they believe in,” he raised even more money on GoFundMe just to see if there was an amount they would eventually accept.

The Children’s Home leadership eventually rejected an astonishing amount of money — roughly $25,000 — all because it was coming on behalf of an atheist organization and they didn’t want to publicly recognize it.

From the very beginning, Matt had said if the Children’s Home continued to reject the money, he would give it to Camp Quest instead. And that’s what he announced yesterday, saying that the bulk of the funds would go to Camp Quest Oklahoma.

All except $5,000, which he said he would give to the Children’s Home, whether they liked it or not, because he didn’t want to screw over the kids just because the charity is run by bigots. (My words.)

The abrupt end came as a surprise to me since Matt had said he would let the fundraiser continue indefinitely, but when I asked him about it, his response made a lot of sense:

This has become way more than two people can handle. It’s taken my focus away from school and work. The amount is way higher than what we originally had anticipated. I think everyone will be happy and if they’re not, that’s too bad.

As someone who has promoted fundraisers that got out of control, I get that feeling. (Hell, the guy who created Flappy Bird shut it down because he was making too much money and it all became overwhelming — and that had nothing to do with charity.)

It’s safe to say Matt’s point has been made: There are some Christians who will refuse to help children if it means accepting the kindness of atheists.

Yesterday, Matt posted an image of the $100 bill that the Children’s Home sent back to him. It cost them $6.47 to do it. 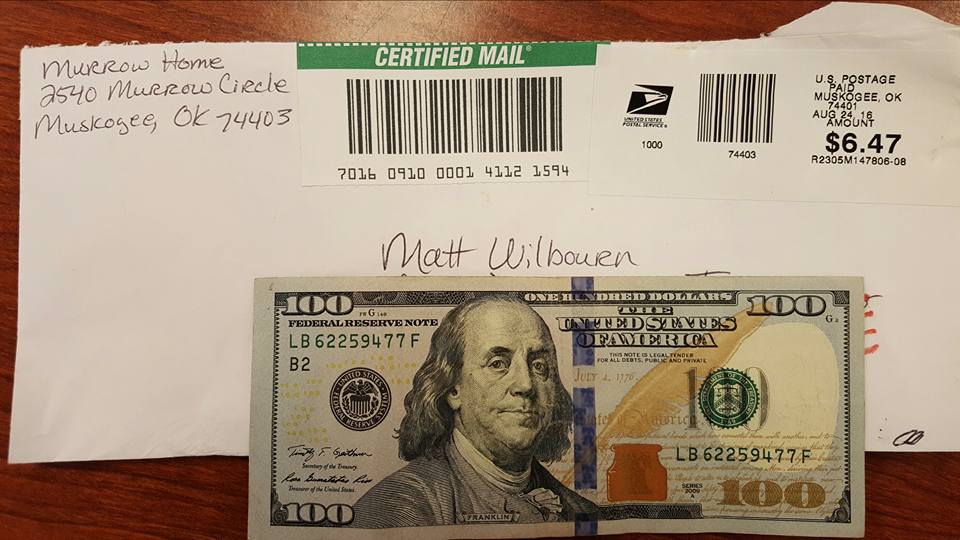 Matt wrote, “We will now be sure to donate $5,106.47 to the Murrow Home.” He’ll do it anonymously. But if they don’t keep the money, he’ll just ask a local church to be the conduit.

August 26, 2016
Great Magic Is Still Amazing Even When You Know How the Tricks Work
Next Post

August 26, 2016 Baptist Convention Leaders Are "Losing Sleep" Because Kansas City Taxpayers Won't Give Them $65,000
"And those Mesolithic dudes who built Gobekli Tepi around 12,000 years ago...BTW, how did that ..."
She of Penultimate Pulchritude Hate-Pastor: “If You Believe the Bible,” ..."
"But notice that in general, neither gets excommunicated.Participating in the ordination of a woman, that ..."
swbarnes2 The Southern Baptist Convention Expelled Two ..."
"I get your point and I fully agree with it, but I really could have ..."
jomicur It’s Not Enough for Progressive Evangelicals ..."
"West Side Baptist Church in Sharpsville, Pennsylvania was booted because its pastor is a registered ..."
swbarnes2 The Southern Baptist Convention Expelled Two ..."
Browse Our Archives
What Are Your Thoughts?leave a comment