In a new video for Big Think, Penn Jillette defends criticism of Islam while denouncing “Islamophobia” — or at least the fear of Muslims.

Not only should we not worry about them, he says, we should be helping them, because they have it really rough right now. If we call ourselves defenders of the First Amendment (or, you know, just decent people), we should be fighting on behalf of the religiously downtrodden, not further oppressing them. 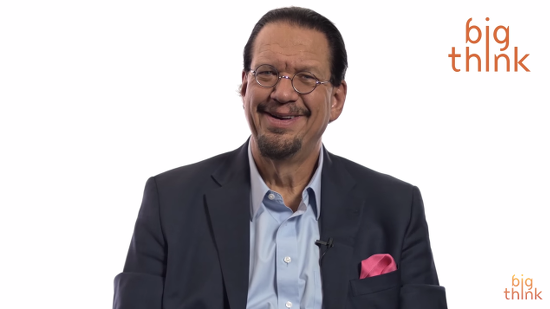 You’re not allowed to hate people for their ideas. It’s the wrong word. It’s just the wrong word. We have to be more careful. Islamophobia is not racism. Saying anything against Muslims is.

You can say Christianity is wrong and have friends who are Christians. You can show full respect for Christians. You’re not Christianityaphobic, you know. You’re just saying no, I have a different idea. That’s what America is. And I believe my feelings as an atheist change somewhat when that man speaks to me because of my heart.

Yes, Islam is wrong. Yes, Christianity is wrong. Yes, Judaism is wrong. I believe that like I believe I breathe. I don’t doubt that ever. But right now, Muslims, those who believe in Islam, really need our help. There’s refugees who are suffering in a way that history will not be kind to us for ignoring that. We must love them. We just embrace them. We must help them. Even if they believe things that we know are wrong.

The full transcript and speech can be found here.

August 25, 2016
Out of Spite, a Christian is Fundraising for the Same Baptist Charity That Rejected Atheists' Money
Next Post

August 25, 2016 Polygamist Leader and Fugitive Lyle Jeffs May Have Been Raptured, Says His Defense Attorney
"You had me worried about the potential of a time machine and/or missing one of ..."
Makoto COVID-Spreading Preacher: Joe Biden is Promoting ..."
"On the bottom of the text box there's a row of buttons (that don't look ..."
Jim Jones Podcast Ep. 358: What Joe Biden’s ..."
".s/\(B\)\( \)\([A-Za-z]\+\)/\1\L\3ing Mad/There. Fixed it for you."
The Mighty Damuramu (pka TOW) Preacher: Trump Will Still Win! We ..."
"Doesn't mean he won't get it again."
San_Ban Preacher: Trump Will Still Win! We ..."
Browse Our Archives
What Are Your Thoughts?leave a comment