Out of Spite, a Christian is Fundraising for the Same Baptist Charity That Rejected Atheists’ Money August 25, 2016 Hemant Mehta

Out of Spite, a Christian is Fundraising for the Same Baptist Charity That Rejected Atheists’ Money 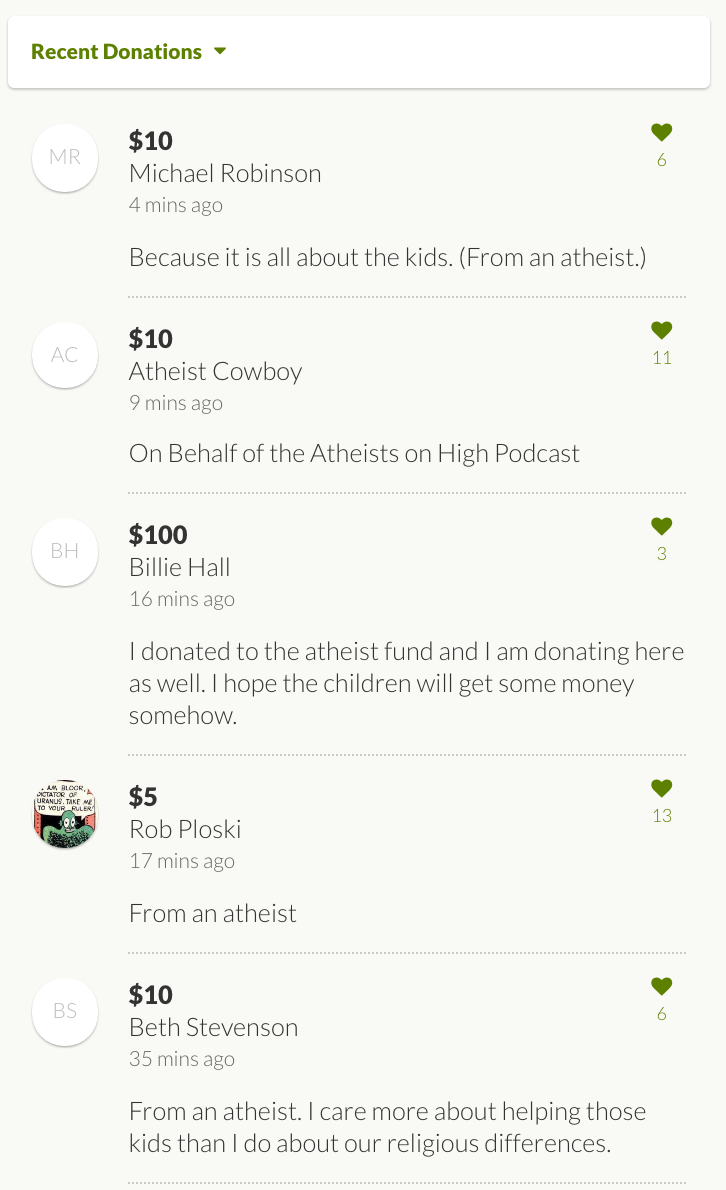 ***Update 2***: The fundraiser has been shut down by Hoos, about an hour after atheists began donating to it en masse. I guess he can’t handle all that atheist generosity. 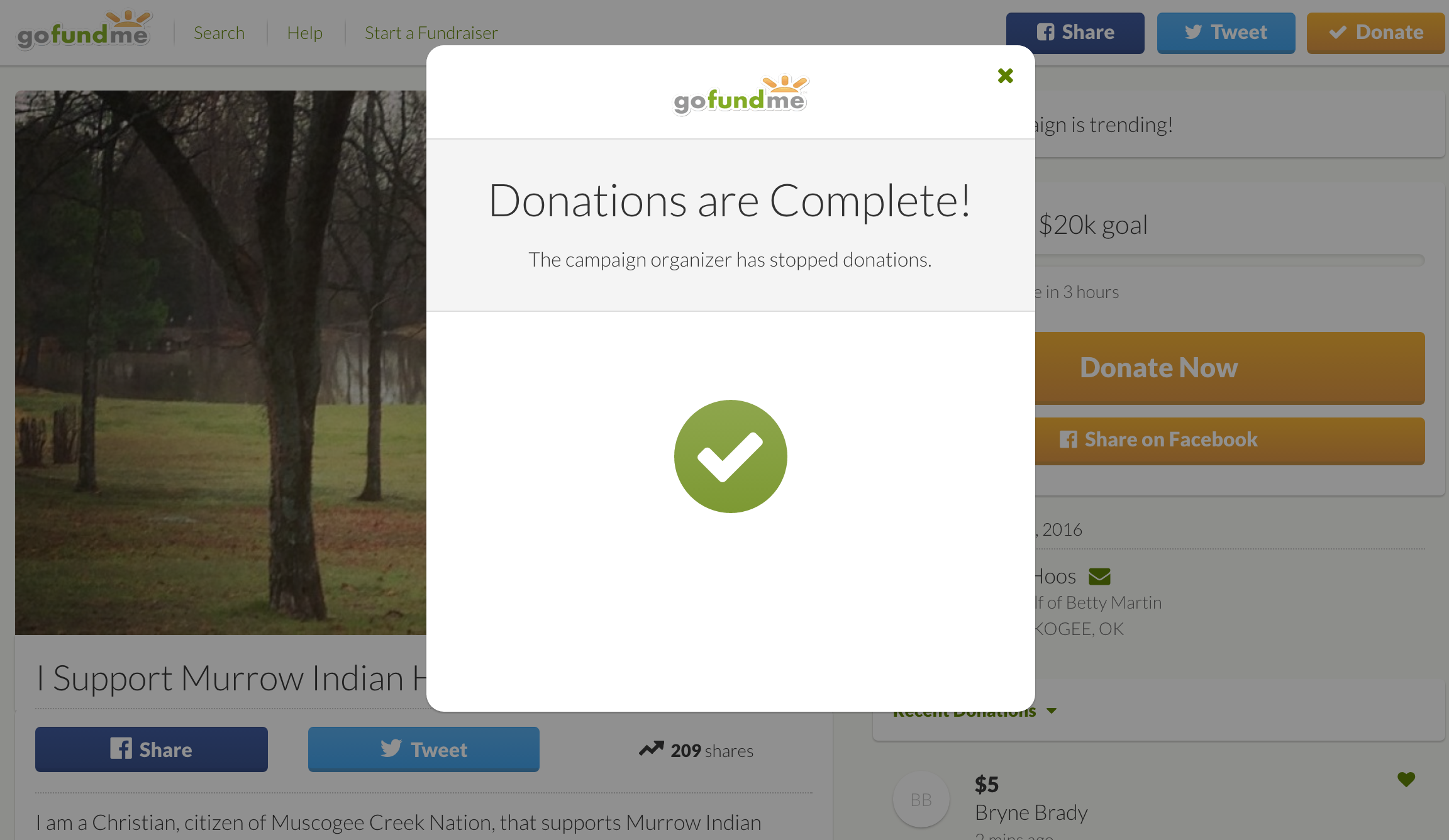 Readers of this site know by now that an atheist tried to donate money to the Baptist-run Murrow Indian Children’s Home in Oklahoma, only to have them reject the cash — ranging from the initial $100 to the fundraised $24,000 (and counting).

Now a Christian has started his own fundraiser for the Children’s Home… apparently to spite atheists for making such a big deal about this. 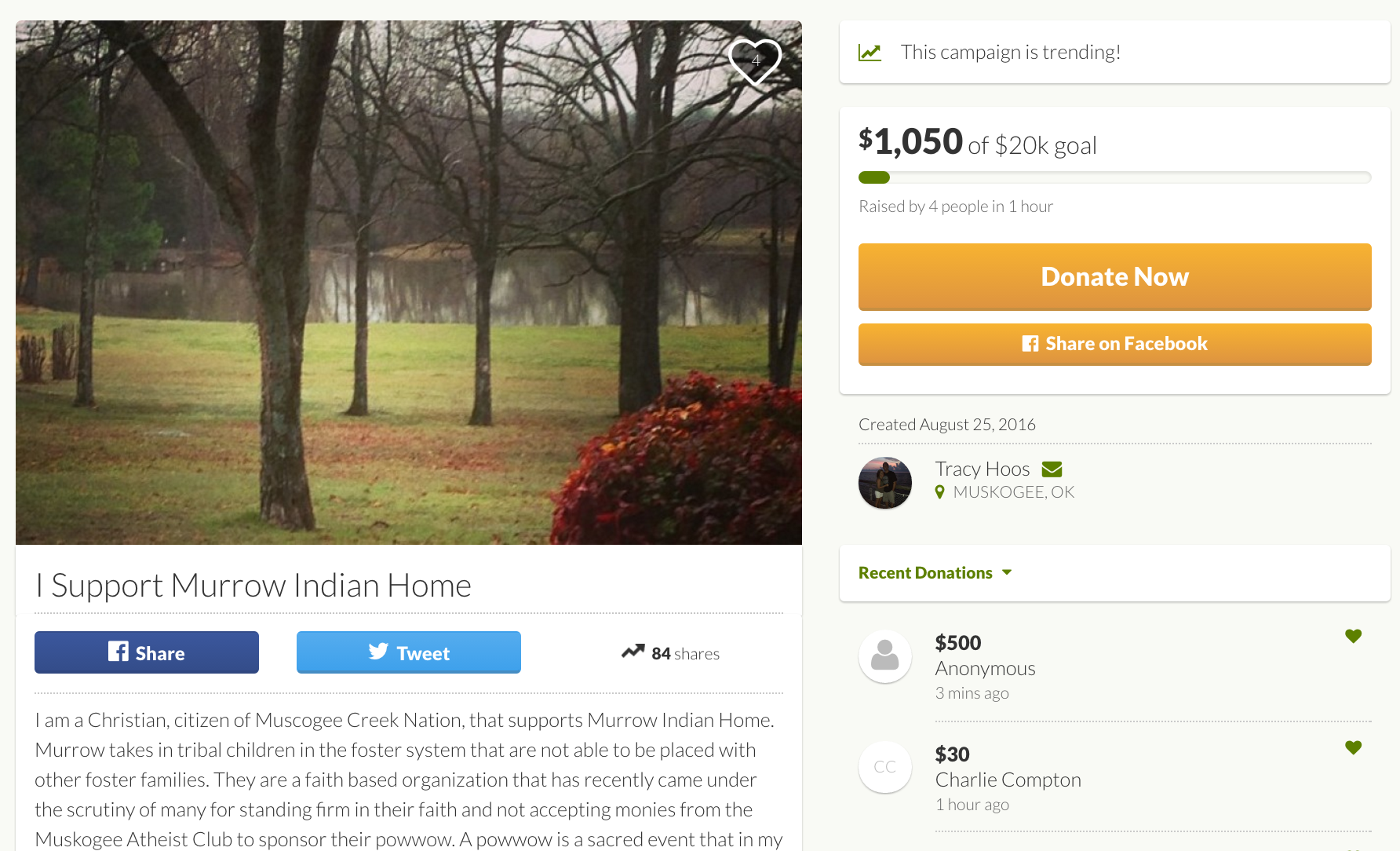 The description of Tracy Hoos‘ campaign shows a remarkable misunderstanding of the facts.

I am a Christian, citizen of Muscogee Creek Nation, that supports Murrow Indian Home. Murrow takes in tribal children in the foster system that are not able to be placed with other foster families. They are a faith based organization that has recently came under the scrutiny of many for standing firm in their faith and not accepting monies from the Muskogee Atheist Club [sic] to sponsor their powwow. A powwow is a sacred event that in my opinion was selected by this organization not out of their goodwill but to only stir the pot. I am inspired by Murrow’s faithfulness. So we are starting another go fund me page to support their powwow. If you feel led to support then please do, if not do not. Second if the other group is so inclined to donate, just cut them a check. No strings attached, no need for recognition. But that is not your intention.

1) The atheists, led by Matt Wilbourn, did not give money to the faith-based charity to “stir the pot.” Matt has said repeatedly that he learned about the organization when a staffer came by his workplace. He was moved by what they did and wanted to make a donation. This wasn’t some conspiracy to pick on Christians.

2) The end of his description is especially infuriating. He acts like the atheists only promised to give the money with strings attached. That’s another lie and it’s irresponsible of Hoos not to have done his homework on this matter.

When Matt gave his $100, he filled out the form provided by the staffer. That form asked him how much he wanted to donate and if he wanted to make the donation on anyone else’s behalf. So he wrote in “Muskogee Atheist Community,” since he knew his members would appreciate it. (Plus, the plan was to reimburse himself $100 from the group’s funds.)

Matt may not have known this, but the Children’s Home intended to print the name of all donors — and everyone on whose behalf a donation was made — in the pow wow program. This conflict is only happening because they didn’t want the word “atheist” appearing on that list.

In other words, Matt didn’t donate with strings attached. He just expected that his group would receive the same recognition as every other one.

The Murrow Indian Children’s Home is free to not list the names of their donors in the program. But it’s profoundly disturbing that they would selectively exclude atheists when they’re recognizing everybody else.

But his rationale is full of holes. He’s full of the same ignorance and bigotry as the Christian group he’s trying to help. Maybe he, like the group’s leaders, should be thanking the atheists for their generosity instead of pretending like this was a selfish move on their part.

***Edit/Update***: I initially thought Hoos was a woman; it seems I was wrong, so I corrected that in the piece. My apologies for the error.

Also, Hoos may have served on a Health Committee for the Murrow Indian Children’s Home. If that’s true, it seems like something he should have disclosed in the fundraiser. A bit of a conflict of interest, don’t you think?

Thanks to Michael for pointing this out.

(Thanks to Deborah for the link)

August 25, 2016
Atheists Are Suing Pennsylvania House Members Who Said They Couldn't Give an Invocation
Next Post