A Baptist-Run Children’s Charity Rejected a Donation of Over $20,000 Because It Came from Atheists August 25, 2016 Hemant Mehta

A Baptist-Run Children’s Charity Rejected a Donation of Over $20,000 Because It Came from Atheists

It’s been a ridiculous 24 hours in Muskogee, Oklahoma.

Just to recap the main points of a story we’ve covered since the beginning, atheist Matt Wilbourn wanted to donate $100 to the Murrow Indian Children’s Home because he appreciated the work they did, even though they were a Baptist-run organization.

After he gave the money and filled out the form, saying the donation would be made on behalf of the Muskogee Atheist Community (which he and his wife Keli co-founded), he received a call from the charity group saying they couldn’t accept his money because “it would go against everything they believe in.”

Matt thought that was absurd. He wasn’t asking them to stop believing in God or promote atheism. He just wanted to help the children and he thought that would override any theological differences.

But how much money would this charity really refuse from atheists? $100 might be chump change to them, but what about $250? $500? So he start a GoFundMe campaign to find out.

And here’s the incredible thing: The Murrow Indian Children’s Home, a charity that claims to care for “American Indian children that are in out-of-home placement as a result of abuse and neglect,” still say they don’t want the money because it’s coming from atheists.

In a press release issued last night, they stuck to their irrational belief that taking money from atheists would somehow compromise their own mission:

The Murrow Indian Children’s Home was founded on Biblical principles over 100 years ago by a Baptist Missionary.

Those Biblical principles include believing and trusting in the Trinity; God the Father, Jesus the Son, and the Holy Spirit.

To accept money for an advertisement which would indicate “In Honor of the Muskogee Atheist Community” in the advertisement, would be contrary to those Biblical principles upon which we at Murrow stand. We are Christians, believing in God, Jesus and the Holy Spirit.

We appreciate the generosity of Mr. and Mrs. Matt Wilbourn for their thoughtful donation to the Murrow Children’s Home. This decision is not about money or personal matters. It is solely about our religious beliefs and Honoring God our Father.

Mr. Wilbourn asked that his donation be noted in the ad, “In Honor of the Muskogee Atheist Community”. Murrow cannot Honor the Atheist non-belief in God our father, and Honor God our Father under our Biblical principles. Those two positions are totally opposite of each other. Therefore, we must respectfully decline the donation and the request to Honor the Atheist Community with the donation in an advertisement for a Murrow fundraising event.

Once again, we thank the Wilbourns’ for their generosity to Murrow and we understand their rights to their beliefs. We also hope that in turn the Muskogee Atheist Community and the Wilbourns’ will respect the Biblical principles of the Murrow foundation for over 100 years and understand why our principles are different and that we must Honor our God.

There’s only one acceptable reaction to that statement: 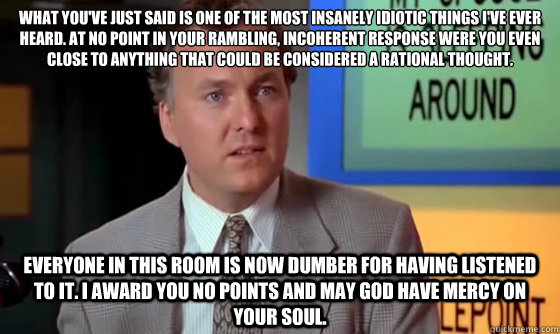 It makes absolutely no sense. Accepting money from atheists doesn’t mean you have to accept their beliefs. It’s just that simple. I’ve worked with several atheist-run non-profit groups and we were thrilled to receive donations from religious people who supported the work we were doing. It happened often.

By their own rules, the Murrow Indian Children’s Home would not accept money from Jews, Muslims, Hindus, Pagans, or anyone else who’s not a Christian, because their beliefs would contradict each other.

I’ve never seen a non-profit that cared so little about advancing its own agenda — in this case, helping kids who are suffering in many ways — that they rejected support just because the donors were open about their theological differences. Keep in mind that many Christians donated to Matt’s GoFundMe campaign; you can tell by the messages they left on the page.

In any case, let’s get to the other issue: What is Matt going to do with the $21,610 in his pocket? (Yep, it went up since I started writing this post)

He said late last night that he would give almost all of it to Camp Quest Oklahoma. The GoFundMe campaign would remain open for anyone who wants to donate, but the funds would now go to the camp for children of atheist parents. (So kids win either way!) Camp Quest organizers said they would use the money to “improve camp programs and increase the number of financial aid recipients.”

I said “almost” all the money.

Matt plans to hold on to $5,000 because he still wants to give it to the children at the Murrow Indian Children’s Home. If the people who run the group won’t accept his atheism-tainted money, he’ll get it to them another way, even if that means donating it anonymously.

How could a $5,000 donor really remain anonymous? I’m not sure. But Matt says if they still reject the money, he’ll donate it to a local church, which will then donate the money to the Children’s Home. Those kids are getting this money, dammit.

I still can’t wrap my head around a children’s charity that rejects perfectly good money. It didn’t come from a hate group. It came from a generous donor who raised even more money for them, and who will still give them thousands of dollars that they don’t deserve out of the goodness of his own heart.

I hope other donors to the charity are aware of this story. Because it seems obvious the charity doesn’t need any more funding. How hypocritical would it be for them to reject thousands of dollars (with no strings attached) only to send out fundraising letters in the winter?

August 25, 2016 Atheist Group Releases Church/State Separation Scorecard for House Members; Most Fail Miserably
Browse Our Archives
What Are Your Thoughts?leave a comment