A fascinating analysis by Public Religion Research Institute research director Daniel Cox at FiveThirtyEight shows how states that have the most religious diversity also happen to be the least religious states in the country. 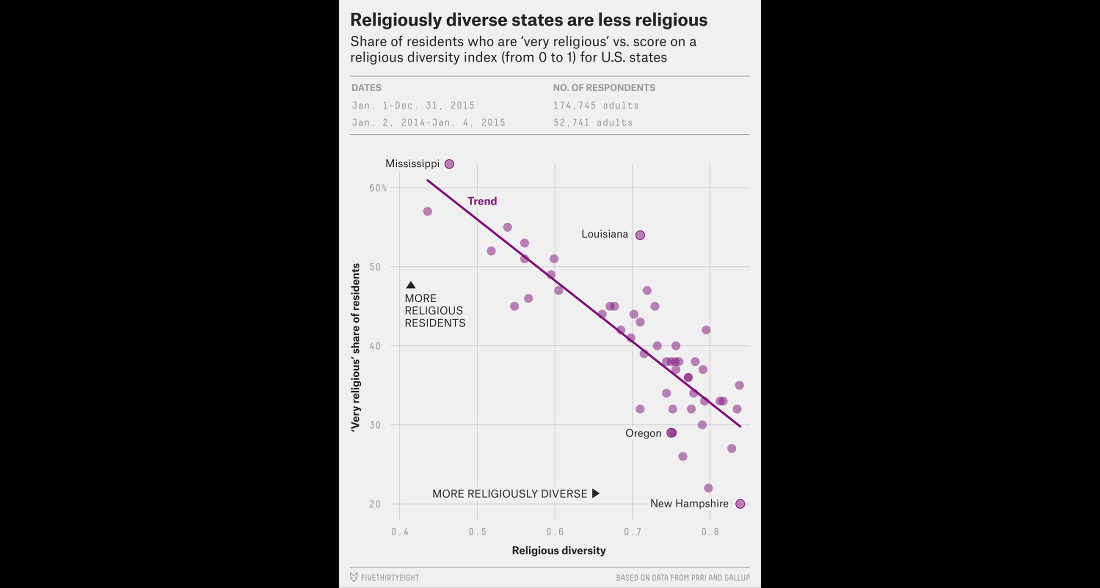 On the surface, this makes perfect sense. When you’re surrounded by people of different faiths (or no religious faith at all), you realize you don’t have to conform to fit in. This isn’t Mississippi. You won’t be punished or ostracized for being in the minority.

You’re also more likely to realize no one group has a unique claim on the Truth. When the majority of the population holds the same beliefs about the afterlife and what it takes to get there, it’s easy to think, “They must have a point or all these people wouldn’t believe it.” But when your friends hold a variety of beliefs, it’s less about one person getting it right and more about everyone heading in the same direction by being good.

I’m hypothesizing here, of course. There’s no single answer for why there’s such a strong correlation between diversity and religiosity.

My favorite part of Cox’s article, though, involves what will happen in the future in the most religiously diverse states. Because when people are surrounded by those who may not share their religious views, you’re bound to see more interfaith marriages. That means the people in the relationship aren’t dogmatically bound to their own faiths to the point where they’d only marry people who share their views. It also means children resulting from those relationships probably aren’t growing up indoctrinated in one faith or the other. Religious diversity, in other words, leads to less religious dogma.

You know what this means, right?

We need to move to Mississippi, fall in love, and start reproducing with the natives.

Do it for America.

(Image via FiveThirtyEight, though you should see the larger version on their site)

August 24, 2016
After Suspicious Investigation, Air Force Officer Will Get to Keep Open, Highlighted Bible on Desk
Next Post

August 24, 2016 A Religious Charity in Oklahoma Says It'll Reject All Money Raised By a Local Atheist On Principle
"Here's an actual point. Does the child in the womb have any human rights? That's ..."
San_Ban The Atheist Running “Democrats for Life” ..."
"Devised the the infamous LAPD Chief Daryl Gates. D.A.R.E was demonstrably ineffective in preventing kids ..."
Akira625 Update: Supreme Court Refuses to Hear ..."
"When speaking of medical procedures, "elective" does not mean "for schiitts and giggles" -- it ..."
San_Ban The Atheist Running “Democrats for Life” ..."
"That's like calling what happened on September 11, 2001 "plane crashes"."
San_Ban Christian Nationalism Was Front and Center ..."
Browse Our Archives
What Are Your Thoughts?leave a comment