Yesterday, during a meeting of the Springfield (Missouri) City Council, councilor Kristi Fulnecky asked the city manager to give an update on the After School Satan clubs that may be coming to local elementary schools.

After some back and forth about how this was really a school board issue rather than a city council concern, she referred to The Satanic Temple as a “hate group.” 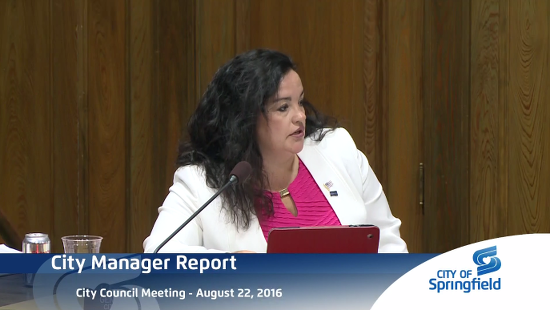 If we could get an update… I know this has been a big issue here in town about the Satan club. And, um, I don’t know if that’s something that the school board sanctioned or… if we can just get, maybe, a five minute briefing about that… I didn’t know if any taxpayer-funded dollars were going towards that… I’ve had calls from parents and I know that we’re separate from the school board…

… I assume it’s a legal issue, but I know that it’s concerning to a lot of parents, because parents don’t want hate groups in the schools, so I would just like to respond to my constituents…

Fulnecky, who’s running to become the Mayor of Springfield, was speaking out of ignorance rather than malice, but it feeds right into the conservative stereotype of non-Christian groups being pure evil.

It’s ironic, too, since the Good News Club was recently defended by Liberty Counsel’s Mat Staver, who vowed to file lawsuits on behalf of school districts if the Satanic clubs “disrupt[ed] the school and target[ed] other legitimate clubs.”

The After School Satan clubs, on the other hand, “will focus on free inquiry and rationalism.” Not hate. Not destroying Christians. Not doing anything evil.

The Satanic Temple spokesperson Lucien Greaves made that argument very clearly on Twitter: 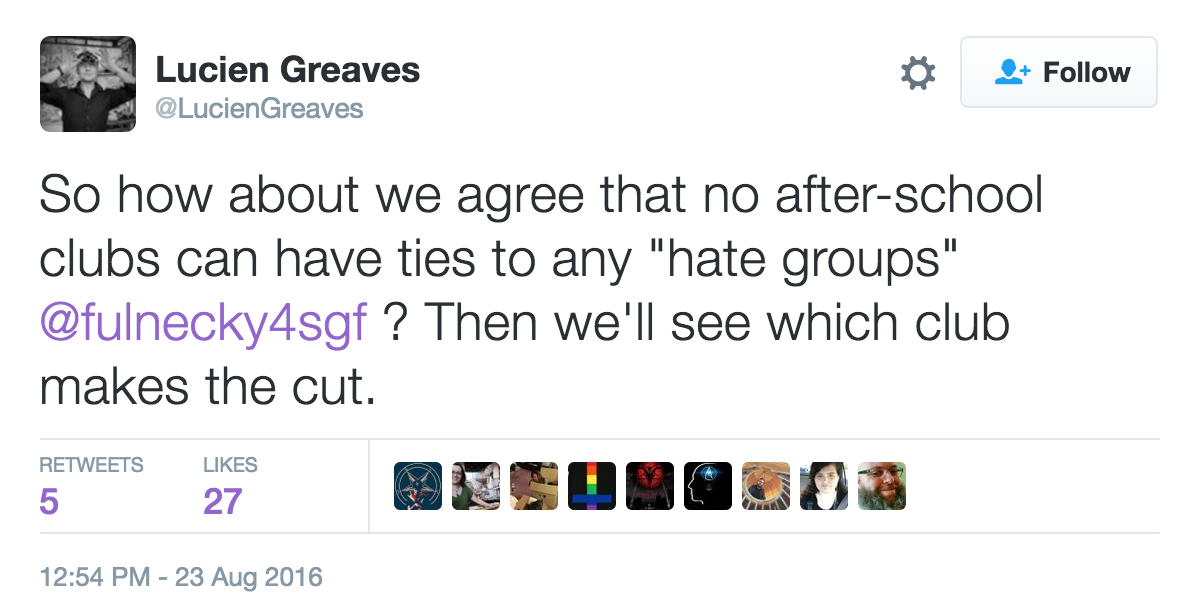 He has a point. If Fulnecky wants to make sure no public schools are supporting hate groups, I’d be far more concerned about the continued existence of the Good News Club, which has the direct backing of one.

Fulnecky seems to have heard the message. Last night, she was doing damage control:

Actually, they kind of do. Taxpayers pay for public schools, which are usually open forums for speech. When a school says yes to one kind of group, they can’t say no to a similar group with a different ideology. Sure, they could say no to hate groups, but the Satan clubs don’t fit that description.

Fulnecky owes The Satanic Temple, and everyone else who cares about religious freedom, an apology.

August 24, 2016
Christian Right Leader Says He Doesn't Know Why God Sent a Flood to Ruin His Louisiana Home
Next Post

August 24, 2016 Fox News Panelist: If Kids Don't Want to Say the Pledge, They're "Free To Leave" the Country
Browse Our Archives
What Are Your Thoughts?leave a comment