No Pastors Have Been Forced to Officiate a Gay Wedding (and Hardly Anyone’s Asking Them To) August 24, 2016 Beth Stoneburner

One of the Religious Right’s biggest fears regarding the legalization of gay marriage was the possibility of pastors being forced to officiate against their conscience. The late Justice Antonin Scalia even alluded to that possibility during oral arguments in the Obergefell case.

A new poll by LifeWay Research, an evangelical research firm, throws cold water on that idea. Not only have pastors not been legally compelled to do so, they’ve barely been asked. 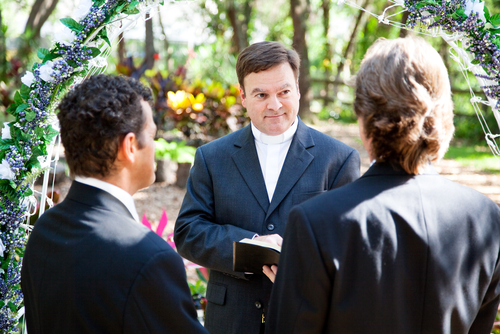 More than 100,000 same-sex weddings have occurred since the Supreme Court ruling. But only 11 percent of senior church pastors, both mainline and evangelical, report having been asked to perform such a rite, according to a poll by LifeWay Research.

Mainline Protestant clergy were three times as likely as evangelical pastors to have been asked. Presbyterian or Reformed clergy are most likely — 26 percent — to have received a request to marry a same-sex couple, while Baptist pastors, at 1 percent, are the least likely.

Rob Boston of Americans United for Separation of Church and State offers an explanation for why this may be happening:

A pastor who is known for holding anti-LGBT views or who belongs to a denomination that is not welcoming to the LGBT community isn’t likely to be asked to preside at a same-sex wedding. And, despite the horror stories the Religious Right circulated prior to the Supreme Court’s ruling in Obergefell v. Hodges, the First Amendment gives every member of the clergy an absolute right to decline any marriage ceremony.

I have a theory that being “persecuted” in this manner is actually what some of these pastors want. Why? Because it adds fuel to their martyr-burning fire: they want the honor of sacrificing themselves for Jesus. Having grown up Jewish in a conservative Christian town, I never understood the martyrdom obsession. When I became a Christian in college and was recruited by the student group Campus Crusade for Christ, I was warned to expect hostility from secular students in response to our narrow way of life. Desperate to belong for the first time in my life, I did my best to believe this was true.

Many of us did face hostility: we brought it on ourselves. We held Q&A sessions about various social issues which were advertised around campus, one of which was homosexuality and the Bible. We chose to alienate ourselves by addressing gay students looking for dialogue with, “We love you, but we hate your sin.” We weren’t looking to build relationships; we only wanted to get our message across, which we absolutely did.

For Christians on the Right who choose this particular “battle,” it will likely become the hill that their brand of Christianity dies on as society continues to progress.

August 24, 2016
Fox News Panelist: If Kids Don't Want to Say the Pledge, They're "Free To Leave" the Country
Next Post