Earlier this month in France, Cannes Mayor David Lisnard banned full-body swimsuits known as burkinis from the city’s beaches. But now a secular activist, horrified by this invasion of religious freedom, says he’ll pay the fines for any Muslim women caught disobeying the new rules. 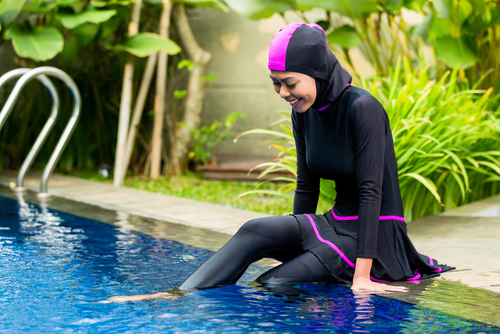 When Lisnard issued the ban, he said burkinis were an affront to “good morals and secularism.”

… Lisnard cited [the Nice] tragedy and subsequent attack on a northwest France church in an ordinance forbidding swimwear that doesn’t respect “good morals and secularism.”

“Beachwear manifesting religious affiliation in an ostentatious way, while France and its religious sites are currently the target of terrorist attacks, could create the risk of disturbances to public order,” the ruling says.

It also sent the message that certain kinds of peaceful Muslims couldn’t enjoy the city’s beaches because they wanted to cover themselves up. As I said before, a better response would have been to improve the security at tourist attractions like the French Riviera, not single out a particular religion.

But for now, women caught wearing a burkini on the beach will be issued a 38 euro (42 dollar) fine.

That doesn’t mean, however, they’ll have to pay it. French-Algerian businessman Rachid Nekkaz, who calls himself a “secular Muslim” (kind of like a cultural Catholic), says he’ll pick up the tab for women affected by what he sees as an unjust ban:

“As soon as I see that France is not respecting fundamental liberties, I always get my cheque book out,” says Rachid Nekkaz.

“I personally am against the niqab and the burkini, but I am like the philosopher Voltaire,” he told the Telegraph.

“Once I do not agree, I will fight to the death to give the possibility to these people to express their opinion or to dress as they please. That is freedom. It is a question of principle.”

Nekkaz did something similar in the past, paying out “€245,000 in fines and associated legal fees” to defend Muslim women in countries passing burka bans.

Bravo to him. He’s not only defending people he doesn’t agree with, he’s putting his money on the line for their cause. That’s how religious freedom should work (even if you don’t have deep pockets). All those Christian legal defense groups could stand to learn a lesson from him.

August 24, 2016
Arkansas Officials Will Soon Meet to Discuss Christian and Satanic Monuments Outside the Capitol
Next Post

August 24, 2016Parade Magazine Columnist Answers Silly Question: "Why Do Atheists Care About Others?"
Browse Our Archives
What Are Your Thoughts?leave a comment