The other day, a Florida man, Micah Brienen, had an irrational overreaction after seeing the Pledge of Allegiance opt-out page in his niece’s student handbook.

His problem was that students could opt out of the Pledge at all (with parental permission, in this case).

The real problem, though, was the Florida law suggesting you needed permission to not say the Pledge. It’s entirely the student’s decision whether or not to stand for it, and no one should ever be punished for not participating.

But try telling that to the ignorant panelists on Fox News Channel.

During an infuriating discussion with guest host Stuart Varney yesterday, the panelists argued that, despite what the First Amendment allows, students should be required to say the Pledge because it teaches patriotism. 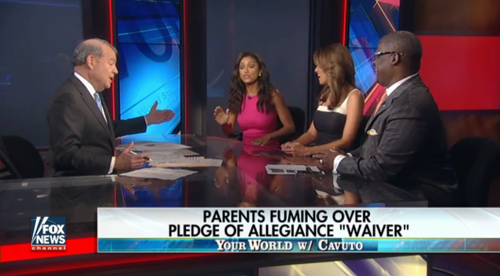 Attorney Eboni Williams claimed: “We need to be teaching patriotism and civic responsibility as the preferred way to do things.” As if going through a mindless ritual is the best way to show off your patriotism.

Fox Business Network host Charles Payne added: “The notion of being patriotic, the notion of pledging your patriotism to this country, I think, should be a requirement.” Of course, when North Korea tells people to pledge allegiance to their country and leader, we call it brainwashing. You can’t make patriotism a requirement. The two concepts are contradictory. A patriotic ritual that you’re forced to say isn’t patriotic at all.

Varney correctly pointed out that students don’t need a waiver to get out of saying the Pledge, and he asked the panel to discuss what would happen if a child who remained seated got picked on.

Cathy Lynn Taylor, a GOP strategist, had a simple suggestion for that student: He can get out of the country.

Here’s one very simple thought: Freedom is not free. If you don’t want to be part of the freedom… of this country, there’s a very simple solution and it’s the most beautiful thing about America: You’re free to leave!

Got that, students? If you want to exercise your First Amendment rights, Taylor thinks you should get out of the country because you’re apparently a traitor.

What an awful panel — and there wasn’t a single voice of opposition on it. Not even from American Atheists, one of the groups reminding superintendents that students don’t have to say the Pledge.

As usual, it was an irresponsible act of “journalism” featuring “experts” who had no clue what they were talking about.

August 24, 2016 No Pastors Have Been Forced to Officiate a Gay Wedding (and Hardly Anyone’s Asking Them To)
"Isn't there some kind of law in the U.S. that requires people to provide the ..."
CageGirl Christian Mother: Staying in a Broken ..."
"My guess is that's it's founded on behalf f the GRU, in furtherance of Putin's ..."
se habla espol Pastors Are Leaving the Pulpit as ..."
"Hey I .... resemble .... that remark.(third try to post this)"
Scenario Angry Christian Mom Boycotts Drug Company ..."
"He's got none to spare, considering the slow ticket sales to his 'History Tour' (snort) ..."
CageGirl Christian Mother: Staying in a Broken ..."
Browse Our Archives
What Are Your Thoughts?leave a comment