Exploring the Gap Between When the Gospels Were Written and the Oldest Copies We Have August 23, 2016 Hemant Mehta

How much time passed between when each chapter of the New Testament was supposedly written to the oldest known copy we have in our possession?

My colleague Bob Seidensticker documented those gaps to the best of his abilities. Just take a look at the Gospels as an example. You don’t see a lot of gaps of 10 years or even 50 years. In some cases, we’re looking at gaps of hundreds of years. 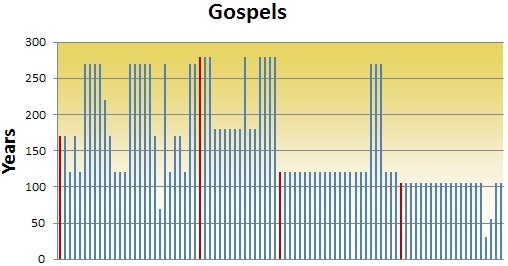 The red lines mark the first chapter of each book — Matthew, Mark, Luke, and John.

You see those spikes throughout the image? Each one represents a long period of time when we’re relying on nothing but word of mouth, oral history, and the belief that the scribes who copied down the stories were as accurate as possible. The foundations of Christianity rely on those assumptions.

The height of each bar is the length of the dark period during which no one knows for sure what happened to the copies. We have enough data to repair some errors, but who knows how many errors remain and how bad they are?…

You wouldn’t believe a supernatural story if it was claimed to have happened yesterday, but we’re to believe supernatural stories about Jesus passed on as oral history for decades before being written down when we don’t even have the originals but only copies from centuries later?

It’s the most consequential game of Telephone we’ve ever seen, and the odds of some serious mistranslations or outright fabrications are enormous.

It’s a fascinating topic and Bob goes into more detail on his site. He also includes charts for other books of the New Testament. Be sure to check it out.

August 23, 2016
If Donald Trump Hired a Personal Songwriter, It'd Be This Guy
Next Post