A Florida Man is Furious That Schools Allow Students To Opt Out of Saying the Pledge of Allegiance August 23, 2016 Hemant Mehta

***Update***: Micah Brienen posted this update to the controversy this morning:

I have just been informed that The Pledge of Allegiance request form has been removed from the student handbook district-wide. They’ve torn it out of every handbook. Per an edict that came down from the district last night. We can make a difference! Let’s save America together!!

If that’s true, then the District is violating the law by not letting students know they don’t have to stand for the Pledge. I’ve informed the atheists groups that filed the lawsuit so they can follow up on this.

(Thanks to Scott for the update)

***Update 2***: American Atheists sent a letter to the District thanking them for ripping the page out of the handbooks (if that is indeed true) because it “recogniz[es] that parental permission for students to opt out of the Pledge is unnecessary and, in fact, unconstitutional.”

Legal Director Amanda Knief added: “… we would also like to reiterate that even if there is no parental permission given or asked for, students retain their full First Amendment rights to opt out from the Pledge…”

When it comes to reciting the Pledge of Allegiance in public schools, the rules are simple: If you want to say it, that’s fine. If you don’t, that’s fine, too. No one can force to stand up, put your hand over your heart, or say it at all.

But Florida, being Florida, can’t leave those rules alone. The law, as it stood last year, was a mixed bag. In parts, it was even more explicit than it needed to be, requiring schools to post notices on the wall reminding students that they didn’t have to say the Pledge. I didn’t mind that one bit — it’s a wonderful thing to let students know their rights.

The same law, however, also included this unnecessary step:

Upon written request by his or her parent, the student must be excused from reciting the pledge, including standing and placing the right hand over his or her heart.

That wording is a little odd, since you don’t need your parents’ permission at all to skip the Pledge… but I suppose if parents don’t want their kids saying it, the schools also have to honor the request.

Florida lawmakers changed that law last year, but not the part involving parental permission. Instead of signs on the wall saying students didn’t have to say the Pledge, the revised rules limited the reminders to the student handbook, making it that much harder for kids to realize they could remain seated during the ritual.

That’s why this past May, the Central Florida Freethought Community and American Atheists sent a letter to every superintendent in the state reminding them that they had to include a notification about the Pledge opt-out in their handbooks this coming school year, adding that there could be legal ramifications if they didn’t include it.

That wasn’t a threat. That was a reminder to follow the law.

Which brings us to what Micah Brienen posted on Facebook last week. He saw that opt-out page in his niece’s handbook — clearly unaware of its history — and suggested there was something wrong with our country that students could ever be excused from the Pledge: 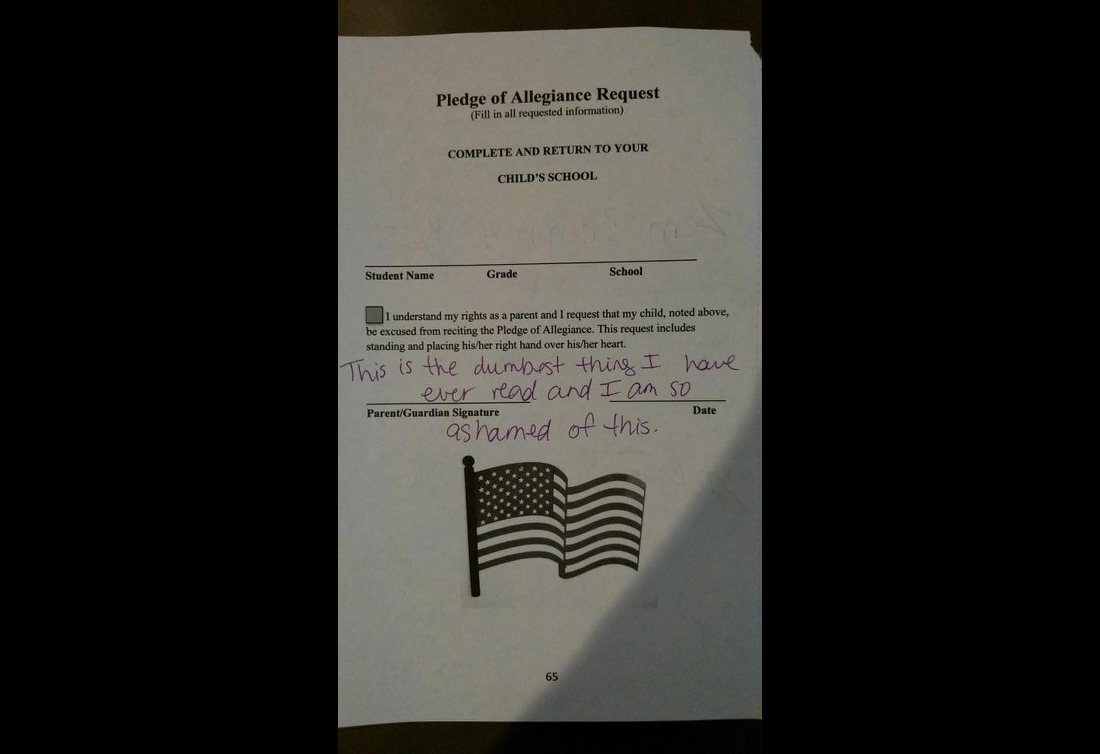 My niece brought this home from school today…What is happening to our country?!?

(It’s possible Brienen wrongly believes parents need to sign the page in order for their kids to be allowed to say the Pledge. That’s not the case at all.)

In any case, you can see what he wrote on the opt-out form: “This is the dumbest thing I have ever read and I am so ashamed of this.”

It’s hardly surprising that a guy who says the Pledge opt-out page is dumb doesn’t understand what it means to be patriotic. Forcing students to mindlessly recite the Pledge doesn’t mean they love the country, while students who remain seated because they understand the First Amendment are really demonstrating their appreciation for the Constitution.

Since that post, Brienen has been on a tear, posting meme after meme suggesting that the Pledge ought to be mandatory. At one point, he even wrote:

… sadly, it has never been more clear that some people have no idea what the progressive movement is and how it has taken over our education system.
It is so important we STAND UP for our country and what is right.

I don’t know what that means, but I’m sure his friends think he’s super smart.

Maybe the worst part of his irrational tirade? On Sunday, he posted the contact information of the current Superintendent — so people could complain directly to him — and then posted a link to the person running for that same seat in the upcoming elections.

Brienen has no idea that all superintendents have to include a page like this in their student handbooks. It’s the law.

Does someone have the heart to break it to him that he’s an ignorant fool?

This concludes another episode of Florida Man Doesn’t Understand The Very Thing He Thinks He’s An Expert About.

August 23, 2016
Ultra-Orthodox Rabbis Ban Women from Going To College and Getting a "Dangerous" Secular Education
Next Post

August 23, 2016 Oklahoma Voters Will Soon Decide Whether To Allow a Ten Commandments Display on Capitol Grounds
"“ I’ve been a feminist for over 50 years.” Congratulations, I can say I have ..."
BensNewLogin Should Two Oregon Educators Be Fired ..."
"Adultery is a crime for Americans in the military."
Maltnothops North Dakota Passes Law Allowing the ..."
"As The Major would say, "No, NO I won't have that ..., there's a place ..."
SltryPrNstyBrtsh&Shrt D.C. Pastor Charged With $3.5 Million ..."
"All out of mustard seeds."
NOGODZ20 A Creationist Laughably Said He Was ..."
Browse Our Archives
What Are Your Thoughts?leave a comment