Joy Reid to Guest Lying About Birtherism: “Even a Pastor Cannot Just Make Things Up On This Show” August 22, 2016 Hemant Mehta

Joy Reid to Guest Lying About Birtherism: “Even a Pastor Cannot Just Make Things Up On This Show”

Over the weekend, on AM Joy, host Joy Reid tried to understand Donald Trump‘s misguided outreach to the black community by speaking to one of his surrogates, Pastor Darrell Scott.

She asked him why Trump was addressing black people while speaking in mostly white communities and why Trump settled a case involving housing discrimination against black people if he really did nothing wrong. In both cases, Scott dismissed the charges, saying he knew Trump personally and didn’t see him as racist.

But when he tried to excuse Trump’s claims that President Obama wasn’t really born in the United States — a conspiracy theory made famous by Trump and which many people saw as veiled racism — Reid refused to let Scott get away with the lie that Hillary Clinton was the one who started it. 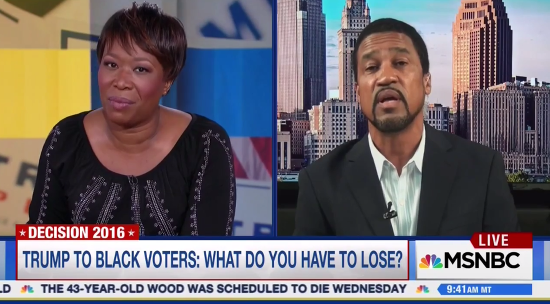 The exchange begins around the 6:42 mark:

REID: Don’t tell me you agree with the birtherism, sir. I hope you’re not gonna say that.

SCOTT: No… What I’m about to say is the birther issue came out of Hillary Clinton’s campaign in [the] 2008 elections.

REID: That’s just actually factually wrong. That’s wrong. You can’t… you know what? Even a pastor cannot just make things up on this show.

Wow. Take lying away from pastors and they lose the greatest weapon in their arsenal.

Here’s a better question, though: How come more reporters don’t just butt in when their guests tell a lie and shoot it down immediately? It’s not like they don’t have the opportunity, given all the media-savvy people now speaking for Trump on cable news programs. It’s not rude; it’s honest. And it makes for better television, too.

August 22, 2016
Atheists (and Jesus) Participated in a Wisconsin Gay Pride Parade
Next Post