Christian Right Leader: The U.S. Is “Doing the Same Thing” As ISIS By Permitting Abortions

ISIS beheads people. ISIS throws gay people off of buildings. ISIS stones women to death if they are accused of adultery.

And according to Mat Staver, the Liberty Counsel attorney who represented Kim Davis, those atrocities are no different than allowing women to have abortions.

Speaking to the anti-abortion group “People Concerned for the Unborn Child” earlier this year — the video just came to light today — Staver made his case: 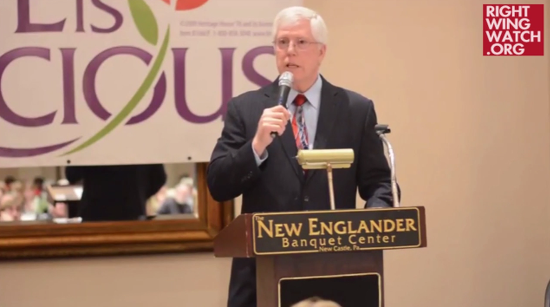 “But you know, as much as we cry at that kind of brutality, and certainly should,” he said, “we are doing the same thing under the rubric of ‘choice,’ under the idea that this is the rule of law and the people up there in Washington, D.C., seven in ’73 and five in ’92, said ‘the Constitution says so.’ Because we’re decapitating children, we’re breaking off their arms and legs, we’re brutalizing them in the same way that these larger people are being brutalized by ISIS.”

“Now, we want to go in and bomb those countries, right?” he asked. “We want to go in and take ‘em out to stop that brutality. In fact, there’s even people there that have given videos, ‘Please, bomb us so that we don’t have to continue’ — these are people who are under the control of ISIS, they’re asking for us to bomb them to get them out of their misery, to kill everyone, to stop the carnage. But that’s happening in this country, and we drive by those places where our children are being brutalized in the same way.”

If Staver thinks abortion involves the decapitation and amputation of children, he has no idea how the procedure works. He’s just using the misleading rhetoric of the anti-abortion crowd. A fetus and grown adult are not the same, and it’s despicable for Staver to suggest that the only way we can be better than radical Muslims is by forcing women to give birth against their will.

There’s also a difference between a country that gives women control over their own bodies and a terrorist organization that actively takes away that control.

But none of this is surprising to hear from Staver. Nuance and logic have never been his strong suits.

August 22, 2016
Norway's Largest Church Now Allows People to Opt Out Online, and Thousands Have Already Done It
Next Post

August 22, 2016 Even Though Target Is Installing Private Bathrooms, Conservative Christians Are Still Complaining
"I know. Anti-trans bigots are seriously intellectually deficient, but what can you do?"
DrVanNostrand Here’s How Well-Known Atheists Are Defending ..."
"There's two things I try to keep in mind:1. The research of war and space ..."
WallofSleep Here’s Madalyn Murray O’Hair Discussing Atheism ..."
"I wish. Occasionally they can be found on eBay. They still make 'em. Amazon and ..."
RegularJoe Quebec Court Upholds Religious Symbols Ban ..."
"Intersex people are not a third sex. Humans are mammals, and mammals only have two ..."
Sankari✓Fᵉᵈᵉʳᵃˡ ᶦˢᵗ Here’s How Well-Known Atheists Are Defending ..."
Browse Our Archives
What Are Your Thoughts?leave a comment