Conservative anti-gay Christian activist Flip Benham was last seen screaming at the Charlotte City Council because the members wanted to treat LGBT people as human beings and he wasn’t having it.

He spend this past weekend ranting near a stage at the Charlotte Pride Parade, telling passers-by to stop acting like putting a “penis up another man’s rectum” is a good thing. Because that’s what the Religion of Family Values sounds like. 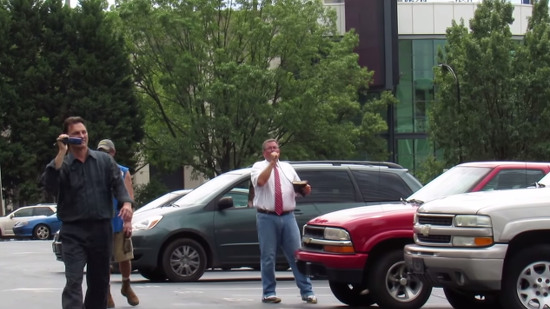 What effect did Benham and his ilk have? Well, just look at this passage from a report by the Charlotte Observer‘s Mark Price:

Christina Woodruff of Huntersville is only 10 years old, but she learned a very grown-up lesson about bigotry this weekend at the Charlotte Pride Festival and Parade in uptown.

“I was just standing there and a man told me that I was a child of the Devil,” said Christina, who is parented by a same sex couple. “I wanted to punch him, but my mom stopped me. I cried instead.”

To their credit, there were some decent Christians there trying to counter the haters, including that little girl’s pastor:

“To those preachers out there screaming the insults, we love you, but stop it,” said Steve Knight of Missiongathering Charlotte.

“Those street preachers screaming hate get so much attention from the media, but there are more churches out here showing their support for LGBT people. You don’t hear enough about us, and we outnumber them.”

When it comes to white evangelicals, only 27% support marriage equality. The number is 39% for black Protestants. Among white non-evangelical Christians, it’s 64% — but it’s a far cry from the 80% acceptance from non-religious people (a number I suspect would be much higher if you looked at atheists alone).

If Knight happens to support LGBT equality, that’s great. Let’s not forget, though, that his religion and fellow Christ-lovers are late to the party. Christian bigotry continues to run rampant and a few good eggs aren’t about to change the awful reputation people like Benham have created.

August 23, 2016 If Donald Trump Hired a Personal Songwriter, It'd Be This Guy
Browse Our Archives
What Are Your Thoughts?leave a comment