Mifflin County (Pennsylvania) is run by three commissioners, one of whom, Lisa Nancollas, is under fire after making multiple Facebook posts calling for an outright ban on Islam: 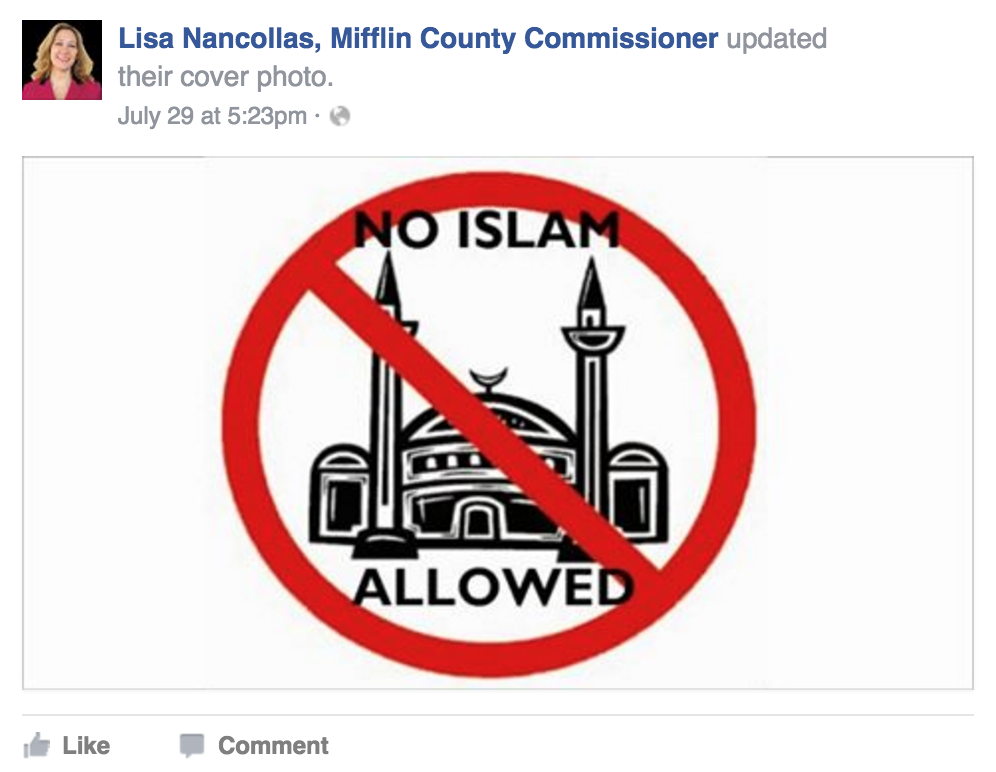 Nancollas seems to think there’s only one interpretation of the faith and all Muslims adhere to it, as if they all accept “honor killings,” female genital mutilation, and sharia law. She also can’t accept any criticism of her bigoted views:

“If you don’t like what I post on my wall then don’t look at my wall,” the second post said. “Also, I believe in the Christian God. I don’t believe in Islam, sharia law nor do I believe in Allah.”

She said people “are only allowed in the kingdom of God if they accept God as their savior not Allah,” in a third post. She has since deleted the meme but has continued posting about Islam.

It’s typical conservative ignorance to assume all Muslims — especially American Muslims — are in line with the extremists in their faith. In fact, most will immediately condemn violence in the name of Islam.

(You’ll never guess who she’s voting for… I guess she learned nothing from Donald Trump‘s fight against Khizr and Ghazala Khan, the patriotic couple whose soldier son died protecting his American colleagues’ lives.)

Nancollas deleted the Facebook page where she made these incendiary comments, but the cache lives on. It’s clear these are not personal pages, but ones she was using during her campaign and as an elected official. Another page, which Nancollas operates under her name but appears to be a home for the county’s Tea Party, still has several anti-Muslim posts.

The question now is how voters in her county will react. Nancollas was elected last November and has three years remaining in her term.

(Thanks to Laura for the link)

August 21, 2016
A Gulf Coast Planned Parenthood May Soon Have a New Neighbor: A Clinic Offering "Reverse Abortions"
Next Post

August 21, 2016 Podcast Ep. 123: Rob McWilliams, Founder of South East Texas Atheists Helping the Homeless
"Mother Teresa in her 1979 Nobel Peace Prize acceptance said Abortion is the the "greatest ..."
Richard Bray Catholic Bishops Condemn Pro-Choice Joe Biden ..."
"I'm not trying to set any contingencies on your continued participation. I'm simply rejecting the ..."
L'Homme Armé Arizona Republicans File Bill to Punish Abortion ..."
""And I say, 'come back and talk to me in four years.’"I can't be the ..."
Jeffrey_Kramer Preacher: Trump Will Still Win! We ..."
"Like I said: pigeon chess."
L'Homme Armé Arizona Republicans File Bill to Punish Abortion ..."
Browse Our Archives
What Are Your Thoughts?leave a comment